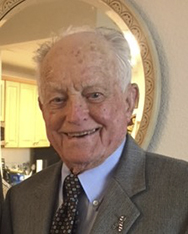 He was born in Pensacola, Florida on October 13, 1920 to Harry Reid Sharpless and Loretta Hitchcock Sharpless.

Bob had lived in Port Arthur since 1931 and was a graduate of Thomas Jefferson High School and the University of Texas where he earned his Bachelor of Science degree in Mechanical Engineering in 1942.

He proudly served his country in the United States Army Air Corp during World War II and was awarded the Bronze Star.

Bob was retired as Manager of Utilities from Neches Butane Products Company in Port Neches after 35 years of service.

He was a member of Presbyterian Church of the Covenant and served as Deacon, Trustee and Elder.

Funeral services will be held at 10:30 a.m., Sunday, July 29, 2018 at Levingston Funeral Home in Groves with a graveside service to follow in Greenlawn Memorial Park.

He was preceded in death by his son, Robert O. Sharpless and brother, Ralph Sharpless.