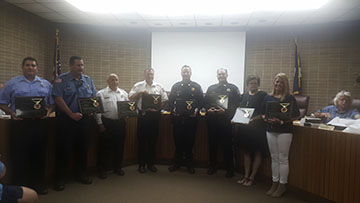 GROVES — A group of first responders received recognition for their teamwork to save a child from a house fire with two of them each receiving the fire department’s medal of honor.

To better show the teamwork of two dispatchers, two Groves police officers and four Groves firefighters on the night of May 16, Groves Fire Chief Dale Jackson showed video of the rescue in the 3200 block of Allison. The packed council chambers were near silent, some with tears, while watching the scene unfold before them and hearing the audio. 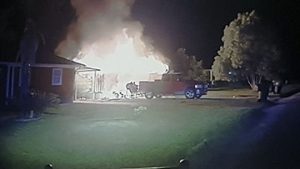 Dispatchers Barbara Stuart and Theresia Dartez were part of the “thin gold line,” as Jackson called them — the ones who are not seen but heard and make the bridge between first responders and the ones in need.

Officers David Hancock and Sgt. Alex Ferrell made it to the scene where Hancock tried desperately to open a window but his efforts were thwarted by burglar bars. 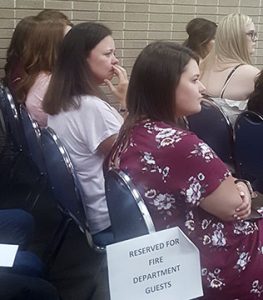 Fire Capt. Pete Konidis took over incident command as Assistant Fire Chief Kelly Moore worked to get the fire down so firefighters Josh Hidalgo and Darron Marsh could enter and locate a 12-year-old handicapped child in a back bedroom. They came out seconds before the structure collapsed.

Hidalgo and Marsh received the medal of valor for their heroism.

“Never in all my years could I explain… I had to show you myself,” Jackson said, his voice cracking with emotion. “It’s important to have their families and the public here (to see). There are so many times we do on these calls and not have the same outcome. This kid recovered.”

The call of the fire came in about 10:15 p.m. May 16 in the 3200 block of Allison Avenue and when firefighters arrived, the home’s garage, attic and roof were fully engulfed.

An 11-year-old boy who lived at the home provided emergency crews with information and that his handicapped brother was still in the house.

The child was located and handed over to medical services that were waiting on him. He was then brought to a local hospital then transferred to Shriners Hospital in Houston. He recovered.

In addition, there was ammunition going off in the garage and a propane tank was venting while the firefighters were fighting the fire.

Cycling without borders, for a legacy

By Lorenzo Salinas l.v.salinas@panews.com   Martin Frank Wong rides to remember his girlfriend and to honor the legacy she helped... read more