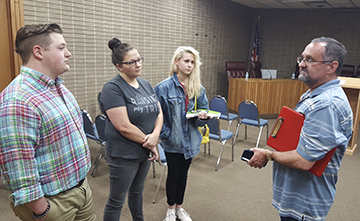 GROVES — Groves City Clerk Kim Lowery is continuing her work to certify signatures on a petition to recall Councilman Cross Coburn with the deadline set for Saturday.

A total of 893 signatures are needed for the recall election — a number that is 10 percent of the number of voters registered at the last election.

Petition signers must be registered voters in the city of Groves.

Jill Pierce, attorney for Coburn, said she made a cursory check of the signatures and noted there were signatures of a few people who actually live in Nederland, one woman signed the petition twice and a situation where the caregiver of a person signed on behalf of their client — none of which are valid. Some, she added, do not have voter registration numbers.

“We’re still in the process of going through the petition and analyzing for the number of signatures and then the number of those we believe are valid,” Pierce said.

Controversy surrounding the drive to recall Coburn continues as Coburn’s attorney Jill Pierce claims the issue is led by City Hall because the wife of Groves Mayor Brad Bailey helped circulate the petition.

“As far as I’ve been able to determine it’s not illegal but it supports my conclusion from day one this is not a citizen-driven petition but something driven by City Hall,” Pierce said.

Bailey is standing behind his wife on the issue.

“She’s a Groves citizen. She is very adamant that the standards and actions of council members matter and she felt strongly that a recall petition was the correct way to participate,” Bailey said. “This is not a City Hall-driven issue.”

Bailey said he and his wife are Groves citizens and the recall petition is a citizen-driven issue.

“That doesn’t mean council members don’t have opinions or rights as voters,” he said. “The main thing is to put it to a vote.”

Pierce is handling the case pro bono because, she said, she knows Coburn and knew him before this happened. He went to school with her son.

Coburn came under fire after partially nude and nude photos of him taken from Grindr, a gay networking/dating app, were sent to City Hall and to local media anonymously asking if this was proper behavior for a city councilman.

Groves resident William Howlett penned a petition to recall Coburn, 19, saying his actions are unbecoming of a pubic official, compromise the integrity of the office and fracture the trust of the citizens.

Per the city charter, Coburn would then have five days to resign or a recall election will be ordered. If so, the election would be held in November during the General Election.

Lowery said she doesn’t not know the potential cost of a recall election, as the city has never had one before.

Other factors come into play as well — whether there will be a contested council race or not, she said.