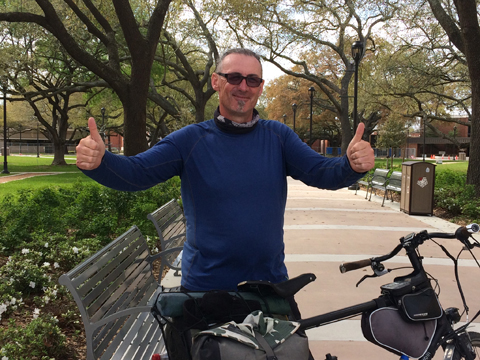 Sven Marx gives his favorite thumbs up sign at Lamar University in Beaumont. Marx has been riding on his bike since April 23 of last year from Berlin. He plans on finishing his worldwide trip some time in late September. (Lorenzo Salinas/The News)

Anything is possible with the right mindset.

Ask Sven Marx, a 50-year-old man who has had two life-threatening illnesses that have physically impaired him for life. Yet, Marx is a man who continues to not be defined by his limits; but instead, pushes them and finds new possibilities within his reach.

Marx has ridden his bicycle from Germany to Estonia, from Russia to Japan and from Los Angeles to Texas on his worldwide tour to push himself and raise awareness for a noble cause.

It is a journey that has taken him some 32,000 kilometers so far; and one that will take him an estimated 18,000 more until he arrives back at his home in Berlin.

He attributes this accomplishment to a positive mindset.

“It all starts in your head,” Marx said. “What the mind can do, the body can do.” 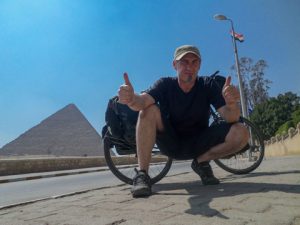 Marx started traveling when he was young. It was a way for him to gain new experiences and meet different people.

“I like to meet people. If you can meet people, you can learn,” he said.

However, while he was working as a diving instructor in Egypt, he started to feel unwell.

“One day I felt bad and had to go see the doctor,” Marx said. “He sent me to a specialist and they took a picture of my head.”

A tumor was found in his brain stem. Marx had to undergo emergency surgery; but only about half of it could be removed.

“I still have half of the tumor in my head,” Marx said.

A visible scar could be seen that runs along the base of Marx’ skull and along the top part of his neck. Underneath remains an approximate one-centimeter tumor that has been irradiated and is not currently growing.

“Three times I died,” Marx said, before clarifying he had to be resuscitated each time.

During his intensive care stay, Marx suffered paralysis of one side of his body and had to be put on artificial respiration and feeding.

“The doctor told my wife I would never be able to walk again,” Marx said.

As a result of the brain tumor, he developed double vision in 90 percent of his field of vision as well as balance issues. Still, he was determined to make the most of his situation and to achieve the best recovery he could.

He regained his ability to walk — albeit unsteadily — after one month. He continues to refine his motor skills every day of his life. However, he found out something unexpected on his path to recovery: He could ride a bicycle easier than he could walk.

“Walking is balancing, one foot to the next foot. It is tricky,” he said. “But a bicycle, after the first push, the bike moves straight ahead.”

Marx said balancing while steering a bicycle is much easier than walking because he does not have to worry about stumbling over his own feet.

“I lived on the bike,” Marx said with a laugh. “Everywhere you met me, you saw me on the bicycle.”

Not two years after half of his tumor was removed, he had to undergo the knife again — this time for skin cancer. After his surgery was successful, Marx set a new goal for his life.

He also took it as an opportunity to raise awareness and support for handicapped people, a demographic he now found himself part of. 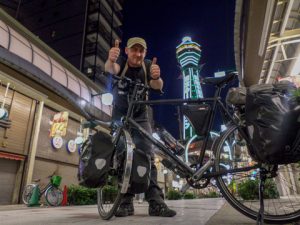 Traveling for a cause

Marx became the project sponsor for Inklusion braucht Aktion, a German organization whose goal is to raise awareness of the topic of inclusion for the handicapped population.

Marx carries the Inclusion Torch, a symbol of the group’s mission, with him on his projected 50,000-kilometer world trip.

“I carry the torch for the handicapped people in Germany,” he said. “I will bring the torch one time around the world.”

Already Marx and the Aktion team have been blessed by Pope Francis during the “Inclusion Needs Action” tour in Rome, where Marx and the organization have been successful in getting the word out about people with disabilities and the special consideration they deserve.

“That’s the reason why I do this — for myself and for handicapped people,” Marx said.

Marx made special mention that most handicapped people are not born that way; they become it — either through accident, war or serious illness like him.

“It could happen like that. Then you will find yourself in another world. Your old world will be gone.”

The fragility of life is what makes it so special; thus, Marx encourages those afflicted with a disability not to wallow in depression and self-pity but rather take the initiative, be responsible for their life and go out and live it to the best of their ability.

Marx related tales about meeting a handicapped man traveling Route 66 on a wheelchair bike and a blind woman traveling Japan. He used these tales to illustrate the power of the human spirit and the potential of a strong will.

“I was (suddenly) thinking everything is possible,” he said.

While traveling, Marx hosts regular lectures about disability, hardships and his time on the road. He’s given presentations in many countries including Germany, Russia and parts of Asia. Through it all, his message stays the same: Don’t give up.

“Go out, find something you like and do it,” Marx said. “In (hardship), it’s not the end; it’s the beginning of your future.”

Separating facts from fiction about AR-15s