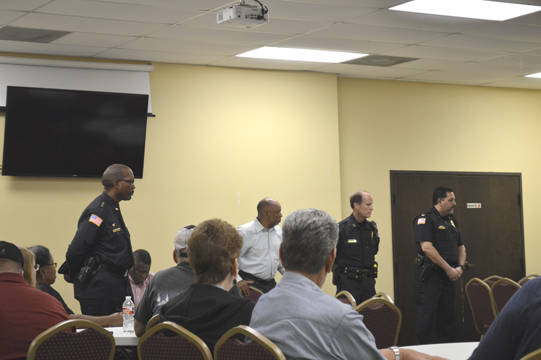 A variety of city topics cover at public meeting

An area of the city hit hardest by Hurricane and Tropical Storm Harvey and a torrent rainfall in late January met face to face with city officials and staff.

Representatives with the Port Arthur Police Department were the first to give a presentation and take questions from the audience.

Chief Patrick Melvin said they want to be a department of accountability. He said the department has had many calls after Harvey in the area of Port Acres, El Vista, Vista Village, Palomar and Montrose, which they call District 1. He said that number has dropped since then due to increase patrols in the area.

Col. Frank Ramirez said if the PAPD doesn’t keep things up in responding to calls, it will eventually start to go down.

“That’s the reason why we’re out there. They know we’re here,” Ramirez said. “Y’all were getting hammered pretty good until we hired some overtime.”

Melvin said in addition to patrolling for vehicles, they also patrol for pedestrians.

“We won’t be violating anyone’s rights, but we will confront. We will address a crime,” he said.

One resident said there’s a house in her neighborhood known for drug activity. She added that the city is working on the problem. Additionally, a female police officer has patrolled the area for several years, and said she was pleased and the officer was definitely doing her job.

On the other hand, a resident said he had some items stolen and he never received a call back from police. Another resident said she wishes patrol units would get to know the neighborhood in El Vista.

Melvin said accountability runs from the top, down. Ramirez added that police need to be seen so criminals will know they’re out.

“We’re working on a better follow up system,” Ramirez said.

One resident said Melvin was working behind the scenes after Harvey and he answered every text sent to him.

“He will return your call. He’s a pleasure to work with. I’ve seen the extra patrols out here,” the resident said.

One resident asked how many officers were working north of Highway 73. Melvin said seven are working over a 24-hour period.

One asked how many work the shift patrolling Port Acres. Melvin answered one is working.

During the nighttime, Melvin said they increase the number of patrols. However, if there’s a major accident, those officers may be pulled away from their area to work the scene until they return. Overtime is also in effect until vacancies on the force are filled.

There are currently 12 vacancies. When Melvin was hired a little more than a year ago there were more than 20 vacancies in the department.

He reminded those interested in joining the PAPD that they can take the civil service exam on April 7.

Moreover, the federal government allocated $90 million for disaster recovery for the state of Texas. Southeast Texas’ share will be $5 million.

On the other hand, the city of Port Arthur must submit a plan for the funds and follow the rules set by the Texas General Land Office.

The area known as District 1 will be tended to first since they were hit the hardest. Eighty percent of the money will go for housing. Dell Computer Company has $96 million in aid for Port Arthur and the Golden Triangle, but first they must see the city’s plan and it must be “very concise and a very precise plan.”

Another aspect is forming partnerships with the Jefferson County Drainage District 7, other governmental entities and non-governmental organizations to work as a team.

Besides housing needs, mitigation and resiliency will play a part to prevent future flooding.

Next to speak for the city was Armando Gutierrez, public works director. Prior to Tropical Storm Harvey, he did an analysis of the streets and found 48 percent of the city streets were either very poor or failed. The storm made things worse.

In addition to fixing the streets, there are things like water and sewer line needs that need addressing.

Furthermore, the last drainage study for the city was done in 1969. Things have changed so much in 50 years a new study is needed. Likewise, the city will be seeking funds and grants to finance the study.

A contractor picked up following Harvey, 500,000 cubic yards of debris in the city, but Federal Emergency Management Agency rules authorized what types of debris to pick up and what to leave.

The Texas Department of Transportation arrived in Port Arthur this month and picked up 10,000 cubic yards since the contractor left. Gutierrez added that city trash trucks have consistently picked up trash too.

Many residents said their trash hasn’t been picked up for weeks.

Gutierrez said two trucks arrived Monday and two more are on the way.

A resident said it would be better for the city to lease the trucks instead of buying them because many city trucks flooded at the operations center on Highway 73 following Harvey.

One resident said they had to evacuate to the Carl A. Parker Multipurpose Center and they were “treated like crap” by the police department there.

Another resident said the city has problems doing the simple things and it was unsatisfactory.

“This didn’t start with Harvey,” he said.

A political flyer circulating around social media that may contain some erroneous information is also livening up the primary election... read more