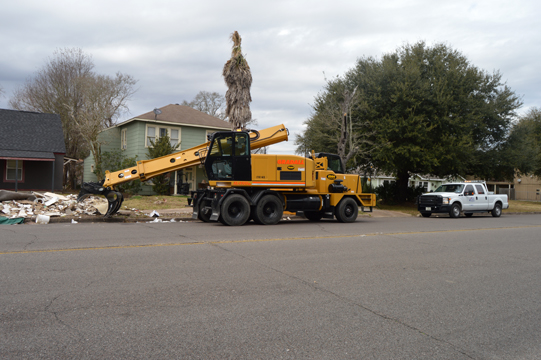 TxDOT trucks will make one pass through the city through a mutual agreement and stay until either those areas are picked up or the Feb. 28 deadline is reached, whichever comes first.

The trucks will make one pass through the city through a mutual agreement and stay until either those areas are picked up or a Feb. 28 deadline is reached, whichever comes first.

Mayor Derrick Freeman said at the regular meeting of the Port Arthur City Council on Tuesday night there was up to 12 inches of rain over the weekend with water getting inside some residents’ homes.

“It was devastating for all of us, but we’re looking for solutions,” he said. “We’re working with TxDOT (Texas Department of Transportation) for trucks to pick up everything.”

The city’s website reads the collection of debris will start in two designated areas:

One area hit hardest by the flood, Port Acres, also has trucks picking up debris, Freeman said. Three crews are now working in the city and another six crews will be in Monday for a total of nine.

Some residents on social media stated they think Freeman should be removed as mayor and replaced by a city councilman. Freeman declined state involvement months ago, fearing it would drive the city’s private contractor away.

Freeman said people have their opinions, but the city manager and the City Council are making decisions about debris cleanup. He added that he and the council members work well together.

Another misconception Freeman said he would like to clear is TxDOT only offered one pass of the city after Tropical Storm Harvey when the city needed three passes to pick up everything.

“When the Governor’s Commission offered to bring trucks, the offer was for only ONE pass. Army Corp of Engineers’ first estimates had Port Arthur debris at 1.2 million cubic yards of debris. They also stated with other experts that we needed at least THREE passes on every home. In the past debris comes out in waves, the first being the most and then the piles decrease from there.

“FEMA was also the end payer of the $25 million dollar price tag for all that debris. So we made sure we did everything they required for us not to be left with the $25 million debt. They explicitly stated if the contractor left for Florida or I wanted to terminate their contract, we had to do everything we did in 2015 when we bid the emergency debris contract out. That process took us THREE MONTHS back then.

“So we were left with a hard decision. Do we accept minimal help, and risk running off the contractor we had going to Florida? Or do we keep the ‘bird in hand, and not worry about the two in the bush?’ What if we ran off the debris contractor we had because, ‘activists’ were blocking trucks, preventing them from making money? Or if we took ‘free’ help that cut in to the contractor’s projections and they went to Florida for less work and more money? Or if I wasn’t surrounded by tested city officials that told me why we shouldn’t kill the emergency contract, when I asked them to? If the contractors would have left, ALL debris pickup would have STOPPED for three months. Because unlike our friends in Groves the City of Port Arthur lost all of our debris trucks when the fleet operations center flooded.

“Hopefully this helps you better understand the headlines and news reports. Now that the debris contract is up, and with us still waiting arrival of new trucks, TXDOT has been a Godsend. I am thankful the one pass is still available to us. Thanks for reading y’all. Sorry for the caps, debris removal can get confusing.”

Freeman said residents who have questions may contact him at either 409-983-8105 or derrick.freeman@portarthurtx.gov.

Pipe-wielding woman may be linked to other crimes

Port Arthur police believe a woman who beat someone with a pipe this week during a home invasion may be... read more