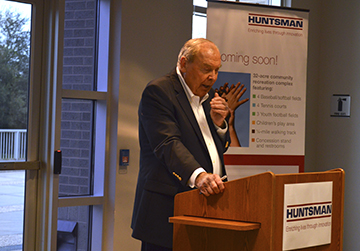 Jon Huntsman Sr. dies at 80; locals react to his passing

“Huntsman has been a great partner in the community and supported many of our activities including acquiring the land to build the new sports complex on Hogaboom,” Bailey said. “He was a great guy, a great family committed to helping the community, and what he did after Harvey was phenomenal.” In the days after Harvey hit, Huntsman stepped up and created the Huntsman Flood Fund; pitching in $2 million. He also challenged others to add to the fund to help families in the Port Arthur-Beaumont area.

“Obviously Huntsman is an important part of the Port Neches community and the city has always appreciated Huntsman for being a good corporate citizen,” Wimer said.

In 2016, Huntsman paid a visit to Port Neches where he met with officials from Port Neches, Groves and local sporting groups to speak about the Huntsman Recreation Complex.

There has been a partnership between Huntsman and the Gulf Coast Youth Soccer Club since the 1992 donation of about 25 acres of land at Hogaboom Road and Twin City Highway. In March 2016 the leasing of 32-acres of land to Groves was announced.

Once developed, the complex will contain four baseball/softball fields, four tennis courts, three youth football fields, a children’s play area and a quarter-mile walking track in addition to a concessions stand and restrooms.

Huntsman was a pioneer in the chemical industry, having founded the Huntsman Container Company in 1970, which revolutionized packaging and plastics, and was the predecessor to what is today known as Huntsman Corporation. In 1974, Mr. Huntsman created the “clamshell” container for fast-food sandwiches and went on to invent as many as 30 other popular products, including the first plastic plates and bowls.

In his heart, Mr. Huntsman was first a philanthropist, and his life’s ambition much greater than business.  His mission was to find a cure for cancer and alleviate its ravaging effects on mankind.  In 1995, he contributed $100 million to establish the Huntsman Cancer Institute, a pioneer in genetic research and treatment and today one of the world’s most renowned cancer institutes and hospitals, located in Salt Lake City.  To date, over $2 billion has been directed to the Huntsman Cancer Institute and Hospital, a substantial portion of which came directly from Mr. Huntsman and his wife Karen.

“Some 10,000 Huntsman employees today mourn the loss of our founder,” said Peter Huntsman.  “Dad loved to visit our sites around the world.  Many of our employees knew him personally, and he knew many of them by name.  All respected him deeply.  They regarded my father as their personal coach, mentor and friend.  While never a chemist, he knew more about human chemistry than anyone I have ever met.

“His passion was building a great company from assets and people that others had seen less value in than he.  He leaves behind a great company, but even more so, a legacy of optimism, ethical behavior and philanthropy that will serve as his greatest accomplishments.”

Due to staff turnover at the Port Arthur Driver License Office, the department will adjust resources at nearby offices to... read more