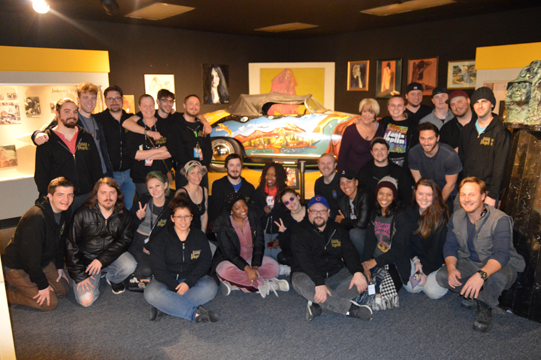 Around 28 members of the cast and crew of “A Night with Janis Joplin” loaded a tour bus from Orange to see the Janis Joplin display at the Museum of the Gulf Coast in Port Arthur. They will be performing at the Lutcher Theater in Orange.

The touring company performing “A Night with Janis Joplin,” had their opening night Thursday at the Lutcher Theater in Orange. But before that, they had to see where it all started.

Around 28 of the cast and crew of the Broadway musical loaded a tour bus from Orange to see the Janis Joplin display at the Museum of the Gulf Coast in Port Arthur on Thursday afternoon.

The museum was expecting just a few members from the company but they were pleasantly surprised so many showed up.

Kevin Beebee, company manager, said it was too unique of an opportunity to let pass.

“The closest we’ve been before was Houston,” Beebee said. “We sing and play the music and this is a neat experience. It’s very inspiring.

“Her music is so unique and special. Our musical is a crossbreed of rock ‘n roll and Broadway,” he said.

The company started touring in October and go all over the country. They take a break during the summer and cast members do individual projects before starting again.

“It’s a pleasure to be in her hometown. We’re very excited,” Beebee said. “We’ve heard about the Gates Memorial Library (at Lamar State College Port Arthur) and when our bus passed it we all got completely silent.”