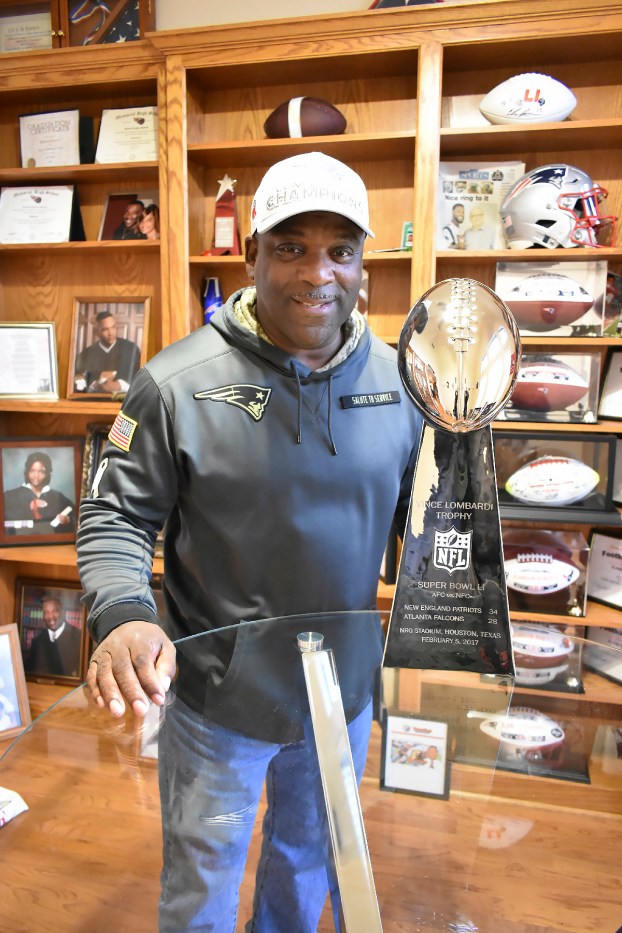 “Just watching the game, seeing how the game was being played, I was going back-and-forth,” Roberts said, recalling being outside with almost 66,000 fans on a dusking January Sunday in Foxborough, Massachusetts. “If there’s room for the Patriots to come back and win the game, they’re coming back and winning the game. You never lose sight of that.”

Half a country away in Port Neches, his wife Stephanie was at home with family and friends watching the game unfold.

“I wasn’t sitting at home,” she clarified. “I was standing. We stood the whole time. When they went in at halftime, [trailing] 14-10, we knew anything could happen the third and fourth quarters. We knew that. But as far as sitting, there was no sitting. It was just walking around the house doing commercials and just like, ‘Oh, my goodness,’ and every time the Patriots had the ball, it was like, ‘Do something with it! We need touchdowns. It was an experience.”

Nothing like the one the whole family will enjoy next week in Minneapolis, or like they had in Houston this time last year.

In typical Patriot fashion, New England scored 14 unanswered and sent the Jaguars back to Jacksonville while earning its 10th all-time trip to the Super Bowl.

“… For some reason or another, we always pull it out,” said Eli, a 1978 Lincoln High graduate who retired from the U.S. Army as a master sergeant and fought in the Iraq War in 2003.

The Roberts have every right to say “we.” Their son Elandon, who graduated from Port Arthur Memorial in 2012, is a second-year starting linebacker for the defending world champions.

Their next opponent: The Philadelphia Eagles, who blasted the Minnesota Vikings in the NFC championship and are playing in their third Super Bowl (Philly’s last championship: 1960 season).

The Roberts family has seen this kind of in-game drama in front of their very eyes before.

Last Feb. 5 in Houston, the Patriots trailed the Atlanta Falcons 28-3. Much of Jefferson and Orange counties had their eyes glued to three local players, defensive lineman Jonathan Babineaux of Port Arthur and kicker Matt Bryant of Bridge City for the Falcons, and Elandon Roberts of the Patriots.

“I was on the fence of being disappointed and being excited,” Eli said. “As you start to see the momentum change and you know the Patriots’ team, the way they come together and face adversity and deal with adversity as a team, you start believing in them. When they first started coming back against Atlanta, you stay right here until that clock goes zero. [I’m thinking] if they go into overtime, we’re going to win this.”

Elandon had a big hand in the Patriots’ comeback. He tackled Devonta Freeman with less than 6 minutes left after a 39-yard run that led to the Falcons eventually punting the ball late in the fourth quarter, with New England still down by eight points.

Elandon couldn’t have it this good for a rookie season, could he? Winning a Super Bowl at NRG Stadium a year after leading the University of Houston to a Peach Bowl win over Florida State?

Yeah, actually he did.

Stephanie, the mother of four (Elandon is the third) and 1981 Lincoln grad, took the experience all in, so close to home.

“It was a very exciting experience for us, especially for us as a family,” she said. “We were glad to have a big game like that in the area where we could all attend.”

With a week full of activities in a host city leading to the Big Game, Stephanie and the family had a chance to mingle with the families of Elandon’s teammates and pose for photos with many of the Patriots’ key figures, including quarterback Tom Brady, tight end Rob Gronkowski and coach Bill Belichick.

As the family heads to Minneapolis next Thursday, Stephanie is looking forward to one thing from their first Super Bowl experience.

“Probably a lot of shopping,” she said.

Had the Vikings been as hot as they started out at Philly last Sunday, the Super Bowl likely would have been held in the home stadium of the host team for the first time in history. (The 1979 Los Angeles Rams and 1984 San Francisco 49ers played the Super Bowl in their respective markets, however.)

“I think that home-field advantage would kind of play a part in that,” he said. “Now, both teams are from somewhere else, so there’s no home field advantage. Going into this Super Bowl, we need to be on equal grounds from the start.”

CBSSports.com reported Thursday the Patriots are a 4.5-point favorite, citing the MGM Grand and Westgate SuperBook.

Meanwhile, Stephanie is embracing the reality of being a mother to a two-time Super Bowl player — who’s only played in the NFL two years.

BOYS BASKETBALL: May has his good days at Bob Hope