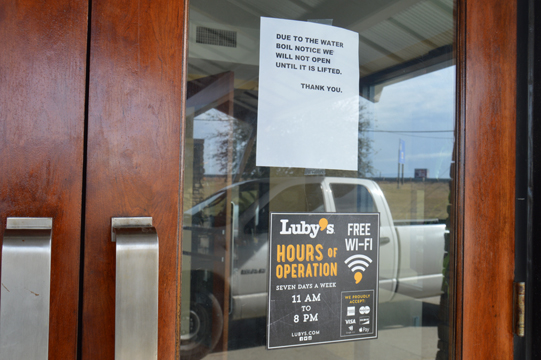 Some notices attached to Luby’s and Chili’s read they were closed until further notice due to low water pressure in the city. Water pressure dropped Thursday and continued low for Friday.

Water is something we take for granted. When it’s gone, troubles seem to increase.

Low water pressure and boil water notices were sent out Thursday and were carried over to Friday. Many pipes broke due to frigid weather this week, city officials said.

Among those affected are restaurants.

Chili’s Grill & Bar, Luby’s and Firehouse Subs had signs posted on their front doors stating they were closed due to the water pressure situation in the city.

Keeya Cotton Gillard, owner of Firehouse Subs, said she and her crew went to work Thursday, but were unable to open. They waited to call off the evening shift until 4 p.m. in hopes repairs would be made.

“We’re hoping the city will fix all the mains,” Gillard said. “We have our fingers crossed, but it doesn’t sound very promising.”

She said it’s “pretty steep in costs” to close for business. Also, the employees aren’t being paid while the store is closed.

Firehouse Subs uses water in their steamers to clean dishes. The toilets are unable to flush because they use pressure instead of using a tank.

“It’s a sanitary thing with us,” she said. “Port Arthur had water problems before where we had to boil water, but not because of pressure.

“We’ve closed three days for (Tropical Storm) Harvey and with the water we’ll be closed for two days.”

The store also had to close early Tuesday because of the ice and snow. Bridges and roads were closing and Gillard wanted her employees to get home safely.

“This week is just shot,” she said.

They also had portable toilets and handwash stations in the parking lot because water pressure was too low to flush.

“It’s like reliving the hurricane. I was the manager at the Beaumont store then and we went two weeks without water,” he said. “We’re washing dishes with chemicals and we have a water heater. We’re not closing. We’ve never had a service interruption except running out of tea and we got some more. We got ice from offsite and we’re making another run.”

Restaurants aren’t the only ones suffering.

Vijay Vansadia, owner of Comfort Inn on Highway 69 in Port Arthur, said the low water pressure has affected his business.

Some guests checked out, some asked for a refund. Nobody has checked in for two days.

“We have no control over that. There was damage to the waterline due to the cold weather,” he said. “I expect no reimbursement from the city because it’s the weather.”

A posting on the Port Arthur Independent School District website read after assessing water levels at each school, the system determined there was too little assurance the schools would be able to function.

“Therefore, we will close school tomorrow and work with the city to get the district back on track,” it read.

The maintenance department will work in an effort to ensure the district is clean and safe for students and staff to return.

A discussion of make-up days will be done at a later date.

The LSCPA website read all campus offices were open to help students with registering for spring classes as well as with needs such as library services, business office, testing and financial aid assistance. Registration also took place through the end of next week.

The Medical Center of Southeast Texas made contingency plans as well and issued the following statement:

“The safety of our patients is our number one priority at The Medical Center of Southeast Texas. We have remained fully stocked with water for our patients and employees throughout the entirety of this situation. We are working with several organizations throughout our community to ensure that we remain this way for as long as the need exists.”

The city of Port Arthur did not provide information of the boil water or water pressure status. Calls to public information officer Risa Carpenter were not returned.

Staff report Beaumont-Port Arthur, beset with flu cases for the past month, nonetheless made a rapid rise in a pharmaceutical... read more