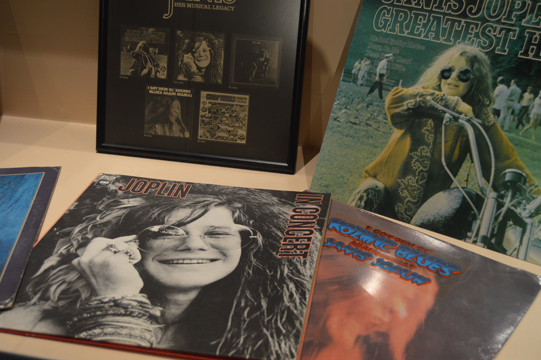 Scores of memorabilia including art, albums and pictures of the famed 60s singer fill the Janis Joplin exhibition at the Museum of the Gulf Coast. Visitors can see the displays during the museum’s open hours 9 a.m. through 5 p.m Monday through Saturday. (Lorenzo Salinas/The News)

Janis: At 75, her memory lends fire to rock, blues

Friday marks the 75th anniversary of Janis Joplin’s birth in Port Arthur, Texas — and with it, a milestone in rock and roll history.

With her electric and often-cited “raw” style of vocals, Joplin challenged the idea of what a female vocalist should sound like. Drawing inspiration from genres spanning but not limited to blues, jazz, country and soul, Joplin’s influence in music has endured for nearly half a century. As a result, she has been dubbed “The Queen of Psychedelic Soul” as well as the first “Queen of Rock.” 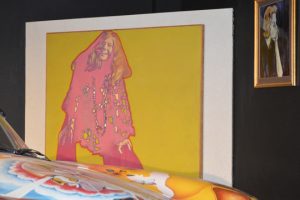 Scores of memorabilia including art, albums and pictures of the famed 60s singer fill the Janis Joplin exhibition at the Museum of the Gulf Coast. (Lorenzo Salinas/The News)

Joplin was born Jan. 19, 1943. She graduated from Thomas Jefferson High School in 1960 and briefly attended Port Arthur College and Lamar State College of Technology before moving to Austin.

Joplin was a fierce liberal, an ardent feminist and would readily take part in the counter- culture movement of the ‘60s. She enjoyed writing and drawing as well as listening to blues artists such as Bessie Smith, Big Mama Thornton and Lead Belly.

She participated in Austin’s budding music scene and sang in clubs around the area. In 1963, she moved to San Francisco where she became enmeshed in the burgeoning folk scene and the rising counter-culture movement. In 1969, she performed at Woodstock.

Joplin had worked with Big Brother and the Holding Company, Kozmic Blues Band and the Full Tilt Boogie Band.

In 1970, Janis returned to Port Arthur to attend her 10-year high school reunion. Two months later, she died of a heroin overdose. She was 27.

She had put out three full-length albums, with a fourth one released posthumously.

“Janis had a really big career, not only in the United States and North America but in Europe as well,” Sam Monroe, president of the Port Arthur Historical Society, said.

“She had such a unique style that it really set her apart. The character and her voice are still unique today.”

Monroe said a lot of people have tried to copy her style, but there was only ever going to be one Janis.

“You’ll know it’s her the moment you hear her voice on the radio,” he said. “She really has transcended the generation she was in. A lot of people tend to get stuck in the generation they grew up in.” 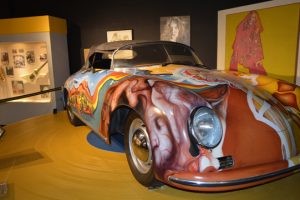 A replica of Janis’ 1965 Porsche 356 Cabriolet is on display at the Museum of the Gulf Coast as part of its Janis Joplin exhibition. (Lorenzo Salinas/The News)

“I think it’s all about timing — a certain person at a certain time,” Director of the Museum of the Gulf Coast Tom Neal said. “She had a most unusual voice — the color of her voice, the texture of her voice. Some artists you can recognize in an instant; she was one of those.”

Neal likened her style to that of particular sounds blues artists could get from their guitars. He said she could do the same thing with her voice.

Some of her most popular songs include “Me and Bobby McGee,” “Piece of My Heart” and “Mercedes-Benz.”

“It’s her style. When she sang a song it became her song,” Monroe said.

He used the example of “Me and Bobby McGee,” a song Joplin did not write but made famous — almost exclusively so.

“It was originally recorded by Roger Miller, but no one has heard of that one,” Monroe said. “Anything she recorded it became her version and that became the most sought after version.”

However, making something one’s own did not necessarily make it easier for Joplin to achieve the level of recognition she wanted from her hometown. Monroe chalked up her numerous tries for acceptance from the residents of Port Arthur as a “normal, human characteristic.”

“She wanted desperately to be accepted back home,” he said. “She wrote letters and sent clippings from the New York Times and Washington Post to people in Port Arthur about her. She wanted people to be proud of her.”

It was her stark independence and refusal to conform to societal ideals that helped make Joplin such a musical icon. Accordingly, it also ensured that she would never be accepted by the majority of people during her lifetime.

For people interested in learning more about Joplin and her place in rock and roll history, there is no better place to do it than the Museum of the Gulf Coast. With its location in Joplin’s hometown, its knowledgeable staff and its varied display of all things Janis, visitors can expect to leave the exhibit knowing something more than when they came in about the ‘60s singer.

“The main thing we hope is that people will come to the museum and learn something about her,” Neal said.

The Janis Joplin exhibit includes several pictures of the musician along with artwork done by her, magazine articles, records and school memorabilia. But perhaps the most commanding of the pieces is a replica of her very psychedelic 1965 Porsche 356 Cabriolet.

“There is a car here. It’s part of the collection from photographs,” Neal said. “That car is significant because it is a copy of the Porsche she used to have.”

There’s also a bronze bust of Janis’ many expressions as well as plans for a more interactive exhibit.

Neal commented on expanding a kiosk system at the museum that would give more information about Joplin. It would be a modern-day feature that would allow visitors to see some of her performances and learn more about her story.

Psychedelic Soul on the Silver Screen

Joplin has been either featured or a part of several films and documentaries over the years. While the biopic titled “Get It While You Can,” slated to star Amy Adams was cancelled this year, there is another major motion picture in the works that is being done in partnership with the Joplin family.

“Janis” is based on the biography “Love, Janis” by the singer’s sister, Laura. Hollywood actress Michelle Williams is slated to star as Joplin, and the film will be directed by “Martha Marcy May Marlene” director Sean Durkin.

The film has been a labor of love by producer Peter Newman, who has been trying to tell Joplin’s story for more than 20 years.

“Janis” is still in pre-production and does not have a release date yet.

A Piece of Home

For those looking for something a bit more local, Joplin’s original home where she spent much of her adolescence can still be found on 4330 32nd St. in Port Arthur. A five-bedroom, three-bathroom, 1,450-square-foot house, the home has a Texas Historical marker in its front yard.

American Real Estate was selling the home; yet, as of December, the house had been taken off the market.

“It was just too complicated,” Diane Fernandez, real estate agent with ARE, said. 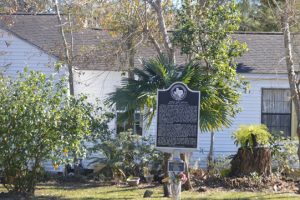 The house where Janis Joplin spent much of her adolescent years still stands on 32nd Street in Port Arthur. It has a metal placard placed by the Texas Historical Commission in the front yard. (Lorenzo Salinas/The News)

Taking Part of the Celebrations

While the Museum of the Gulf Coast is not having a special celebration of Joplin’s 75th anniversary —the family requested that they not — the museum will be open Jan. 19 and the Janis exhibit will be open for view like it usually is.

In other areas of the state and country: