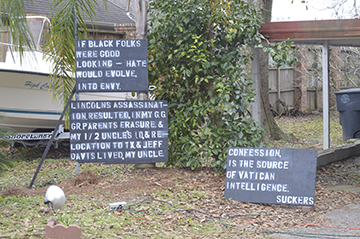 A Groves homeowner has garnered attention for years for his homemade signs sharing his views. While some consider the signs distasteful, they are not illegal. Mary Meaux/The News

Homeowner’s signs may offend, but not illegal

GROVES — A property owner in Groves has unwittingly stirred up conversation about freedom of speech with his placement of signs along his fence line.

The topics on the black, wooden signs with white block lettering run the gamut — from condemning lawyers as “professional liars who run the country and has made it evil,” and the Vatican turning a blind eye to the Holocaust. On Tuesday, a posted sign suggested that blacks are not attractive; he also made a boast about his own self-confidence.

But the words, illuminated at night by floodlights on Taft Avenue, are not illegal.

Groves City Manager D. Sosa said he receives a call on the particular situation about once a year. There was a call last week about the signs being on the city right of way, which is city property. A code enforcement officer went and spoke with the homeowner, who promptly moved the signs without incident.

“We have consulted with the FBI and our own police department,” Sosa said. “He is not in any violation of any local ordinances; we’re not talking about action (on the homeowner’s part) here, we’re talking about speech.”

He said the homeowner is allowed to exercise his freedom of speech until that speech manifests to something illegal, and he has not crossed that line nor is expected to.

A reporter with The Port Arthur News knocked on the door to speak with the homeowner; no one answered.

Sosa said the signs generate a lot of unwanted negative attention to his city and that he’d rather see positive attention.

“But none of this rises to the level of intervention by authorities,” he said. “I don’t think he is after notoriety or fame; he just expresses it in an unusual way.”

Groves Police City Marshal Norman Reynolds Jr. said there have only been a handful of calls over the last few years but agrees with Sosa that no law has been broken.

Reynolds said the man has gotten “a little personal” before with one of his neighbors but has never posed a threat.

A closed Facebook page for residents of Groves exploded with comments when a local media’s story was posted regarding the signs. Some commenters agreed the man is exercising his freedom of speech and that hurting people’s feelings isn’t illegal while some say the homeowners sign regarding blacks is discriminatory.

Some, for the most part, shake their head and go about their business.

Hearing in limbo; attorney for fired detective no longer with CLEAT

An attorney with the Combined Law Enforcement Associations of Texas who represented a fired Port Arthur police detective through an... read more