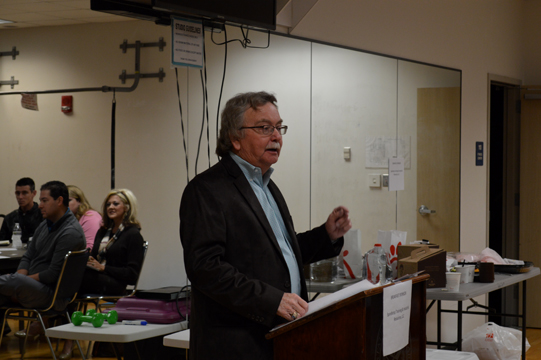 Travis Woods, general manager of T&L Solutions, LLC, said contractors need to have their radar on for 360 degrees when chasing upcoming industrial projects and to not let smaller projects slip past.

Woods made the comments at the Contractor Business Group meeting Wednesday morning at the Carl Parker Center at Lamar State College-Port Arthur. The Greater Port Arthur Chamber of Commerce sponsored the event.

Woods gave a rundown on $220 billion in proposed funding for regional industrial projects from Houston to southwestern Louisiana.

“This is a real good hotspot,” Woods said. “We’re talking about all of the money that will be spent in two cotton-picking years.”

Larry Kelley, Port of Port Arthur director, said the port officials will open bids on Jan. 17 for the Berth 5 construction project and the 600-foot Berth 6 expansion project. Kelley said the port has had an increase in military cargo. The expansion will also accommodate larger vessels.

Voters approved the $89.95 million bond for the Berth 5 and 6 projects in an election in May 2016 to upgrade facilities.

By Lorenzo Salinas l.v.salinas@panews.com   The work has been done; now, the next part is just waiting for the OK... read more