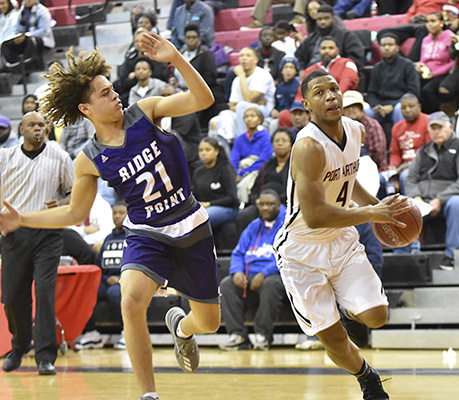 Darion Chatman of Memorial drives past Andrew Reed of Ridge Point in the first quarter on Thursday. (I.C. Murrell/The News)

This one’s for J-Dub: Titans outpace 6A Panthers, dedicate game to fan 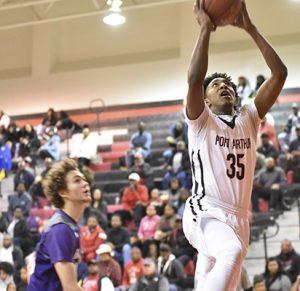 Thailan Wesley of Memorial goes up for a layup as Jonathan Luke of Ridge Point trails on the play in the first quarter Thursday. (I.C. Murrell/The News) 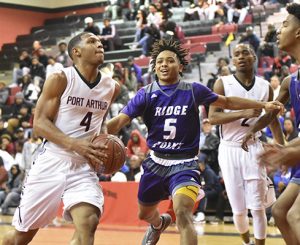 Darion Chatman of Memorial drives to the basket as Kevin McGaskey of Ridge Point tries to stop him Thursday night. (I.C. Murrell/The News) 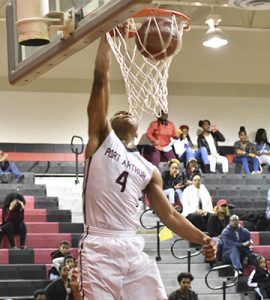 Darion Chatman of Memorial goes for a dunk in the second half against Ridge Point on Thursday. (I.C. Murrell/The News)

The packed house inside Port Arthur Memorial’s Competition Gym was still filing out as senior swingman Darion Chatman pointed the fans out following Thursday’s nightcap at the James Gamble Classic.

“You see all these people here?” Chatman said. “The other day before Christmas [Dec. 23], my homeboy J-Dub died. He got shot in the chest.”

J-Dub was Jalen Johnson, 24, a Port Arthur resident and Memorial fan who was shot to death in Longview.

“With all these people, we did it for him,” Chatman said. “We played his song before the game, brought them roses, left his seat empty and did everything. This is for him.”

The Titans then went to work.

Thailan Wesley hit 15 of his game-high 26 points in the first half, Chatman finished with 20, and 5A fifth-ranked Memorial scored a convincing 78-59 win over 6A Fort Bend Ridge Point.

Memorial (11-5), which has won three straight all at home, will take on Houston Scarborough at 6 p.m. Friday in another tournament nightcap.

Memorial was ahead 14-4 halfway through the first period behind three Wesley field goals and two Chatman drives to the basket. Ridge Point (14-6), which started out cold from the field, climbed to within 23-21 in the second quarter behind seven of center Jordan Wallace’s 10 points and trailed 36-34 at halftime, but trailed the entire game.

“Execution would be a big part,” Chatman said. “We executed in the second half.”

Memorial executed to the tune of a 12-0 run out of halftime, and the Panthers never recovered.

BRIDGE CITY — Port Neches-Groves raced to a 23-10 first-quarter lead and weathered a 34-point performance by Sabine Pass’ Daniel Sam to pick up the first of two victories Thursday in the Bridge City Cardinal Classic.

BRIDGE CITY — Another strong first quarter gave the Indians a great start in their second win of the day.

BRIDGE CITY — A one-possession game with less than 4 minutes remaining expanded to a 14-point Cardinals win.

Five different Cardinals each scored in double figures. Sam led Sabine Pass with 35 points and made 13 of 18 free throws, while James added 19 points.

HOUSTON — Texas coach Tom Herman knows he has a long way to go to get the Longhorns where he... read more