Free COVID-19 testing next week in Nederland. Get the details. 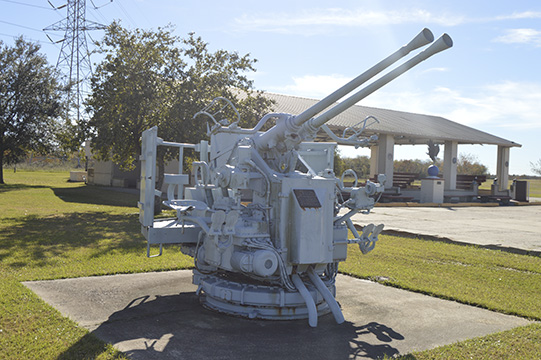 This 40 mm naval gun at the Golden Triangle Veterans Memorial Park will have a Loaned Artifact Condition Report for the Naval History and Heritage Command issued on it. (David Ball/The News)

The Jefferson County Commissioners Court approved a six-year property tax abatement agreement between the county and Dow on Monday.

David Winder, director of Texas public affairs and government affairs for Dow, said the abatement would allow the company to modernize its Beaumont worksite on Highway 347 by building a new control room, offices and associated equipment for the manufacture of products.

“We appreciate the commissioners court taking this step today,” Winder said. “We will retain 60 jobs and create 200 construction jobs. It’s a $109 million project.”

He doesn’t know when construction will start because a timeline hasn’t been created. He added the company hopes to break ground soon.

The Commissioners Court approved establishing a reinvestment zone with Dow Chemical on Nov. 27.

County Judge Jeff Branick said the tax abatement with Dow would retain a number of jobs in the county.

“They will spend $109 million on the facility to fulfill their manufacturing purposes,” Branick said. “We hope it leads to additional investments around Jefferson County.”

Property taxes are local taxes that provide the largest source of money that local governments use to pay for schools, streets, roads, police, fire protection and many other services, according to the Texas Comptroller website. Texas law establishes the process followed by local officials in determining the value for property, ensuring that values are equal and uniform, setting tax rates and collecting taxes.

Branick believes the plant’s property taxes go to the Beaumont ISD since it is located in Beaumont.

The commissioners approved and authorized the county judge to execute a Loaned Artifact Condition Report for the Naval History and Heritage Command in Washington, D.C. for the 40 mm gun mount displayed at the Golden Triangle Veterans Memorial Park on Highway 73.

A plaque read the gun came from the USS Sumner County LST-1148. It was given in appreciation to the citizens of Bridge City who made the display possible.

“Be it known that in remembrance of all those that served this nation, those still serving and those that will serve in the years to come, the citizens of Bridge City, Texas, shall remain proud and grateful for their devotion to God and country,” it read.

Allison Nathan Getz, tax-assessor collector, reported that last month 20 hotels were delinquent in paying the Hotel Occupancy Taxes to the county. They are now down to one hotel that is delinquent.

Additionally, the county was originally owed thousands of dollars including a hotel in Port Arthur that was nine months behind and $45,000 in the hole. They have since paid up and now there is $5,000 left to pay to the county’s coffers.

A gift to continue the church’s mission