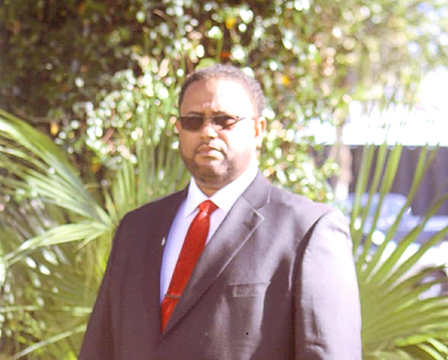 PAISD trustee announces bid for Justice of the Peace

A Port Arthur local has announced his intention to run for county judge—a position he says would be good for the community and the school district.

Joseph Guillory II, a trustee with the Port Arthur Independent School District and a director on the Port Arthur Economic Development Corporation board, announced his candidacy for Jefferson County Precinct 8 Justice of the Peace Tuesday.

“I love this city,” Guillory said, in response to why he chose to run. “And it gives me a larger platform to do good for this city and its community.”

Guillory said Pct. 8 works directly with the school district; and, as a result of his work with PAISD, Guillory felt as though he could bring a relevant experience to the judicial position.

He cited his life experience with the district, his training on the board and the relationships he’s developed all as positive factors for his run for JP.

“The school board has given me a great place to start,” Guillory said. “They’ve given me meaningful work, valuable work and the people you work with is incredible.”

“Just getting us back into school after Harvey, I can’t say how much I appreciate the superintendent and the staff.”

Guillory said how his time with the school has provided him with a purpose, in addition to a few key takeaways.

“First, it’s allowed me to identify how important partnerships are; second, it’s taught me how important it is to operate with professionalism; and third, it’s given me the opportunity to show my passion for what I love to do,” Guillory said.

One of those passions is for the city’s youth; and Guillory reiterated that the children are the future for Port Arthur and its citizens. Additionally, he stated what kind of judge he would be if elected.

“I would treat everybody with respect and a fair hearing. I would be honest and independent… In fact, one of the things I’m most proud of is my independence. I want to do well for the community.”

Guillory noted how his “independence” put him at odds sometimes with certain board members, but he said he always appreciated the fact that they didn’t always agree.

In citing one of the aspects that distinguishes him from incumbent Thomas Gillam III, Guillory again cited his independent way of thinking. However, he was quick not to cast any aspersions on Gillam.

“I’m sure he did all he could for the welfare of the community. I won’t discredit anything he’s ever done,” Guillory said. “This isn’t a race against Judge Gillam… This is a race for the position that is available.”

If Guillory were elected, he would step down from his position on the PAISD board; however, his term would end in May regardless.

The Pct. 8 JP election will be held in May of next year.

Even with some cancelations, plenty of holiday events upcoming

Port Neches-Groves’ Indians advancing in the playoffs has put a snag in some upcoming holiday events but not all of... read more