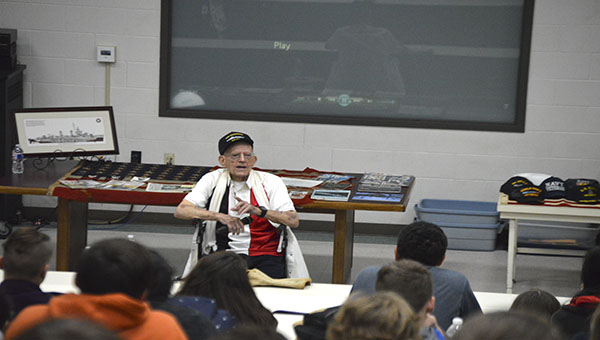 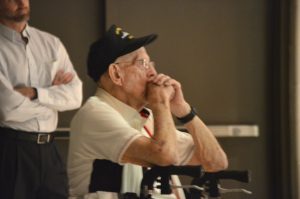 World War II Navy veteran Tom Wilmore is still as he watches a video of the USS Herndon and the D-Day invasion at Port Neches-Groves High School on Tuesday.
Mary Meaux/The News 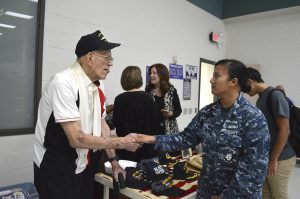 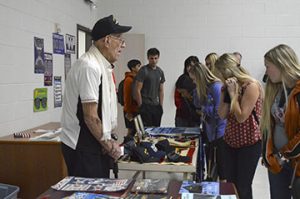 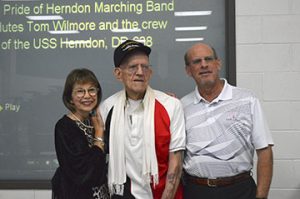 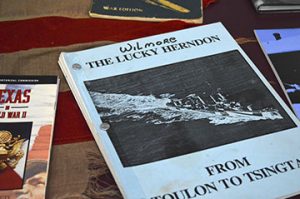 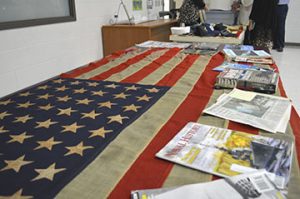 PORT NECHES — A group of U.S. history students at Port Neches-Groves High School got a first hand account of D-Day from one of the men who served on the famous destroyer, the USS Herndon.

Tom Wilmore, who was a torpedo man’s mate second class in the U.S. Navy and of the 300 plus who served aboard the Herndon, he is but one of four still alive. Wilmore who has a collection of military baseball caps received a new one at the end of the presentation courtesy of Herndon High School Band of Herndon, Virginia.

The band has been invited to represent the United States at the 75th anniversary of D-Day in 2019 in Normandy, France. They will not only represent the U.S. but the crew of the USS Herndon, according to information from the group. Their marching band banner will feature a photo of the destroyer, students will all wear USS Herndon ball caps and each student will carry a photo of one of the men of the Herndon.

Port Neches Chamber of Commerce members were on hand to present Wilmore with the red ball cap at the end of the DVD presentation.

It was also announced that Wilmore would be the grand marshal of the Port Neches Christmas Parade.

Wilmore. 92, is only recently sharing his dramatic story of childhood, and then quitting school to enter the Navy. His service led him to San Diego, California; Mediterranean, North Africa, England, Ireland, Egypt and Normandy, France. He took part in Operation Overlord, D-Day Normandy.

Looking across a sea of fresh faced teenagers at the high school Wilmore explained that he was just 17 when he lied about his age and went into the Navy.

For about nine months he and others worked to help escort troopships across the Atlantic to British ports for the buildup to the invasion. Knowing that all out war and destruction was near he had a photo taken and sent to his father, he said.

“It was close to the time we were to start shooting – six seconds past 6 a.m.,” Wilmore said. “Then we heard something, (makes buzzing noise). It grew louder and louder and louder. It was hundreds of four engine bombers going to bomb the beach. The sky had almost turned black.”

But the bombs weren’t penetrating the German enforcements. Artillery was needed and came from the Herndon.

The Herndon led the pack of thousands of other ships in the attack.

The weather was bad with rain and high seas. He recalled me climbing the rope ladder up a ship only to be slammed by a 20-foot wave and likely crushed between the vessels.

By Lorenzo Salinas l.v.salinas@panews.com   Business appeared good—especially for small businesses in Mid County. Shoppers were out and about on... read more