Cops seek to help disabled PA woman get back in her home; volunteers needed 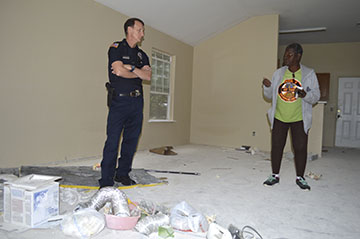 Cherry Johnson will not be in her kitchen making her traditional Thanksgiving Day meal this year and her worry is that the guests she normally feeds will miss out on a home cooked meal.

She lost almost everything when her Neches Avenue home was flooded during Tropical Storm Harvey. Still displaced, Johnson worries about the Port Arthur Police officers that she feeds on Thanksgiving.

Now, a group of the officers are working – and seeking other volunteers, to help get Johnson back in her home in time for Christmas.

Johnson, 66, disabled and widowed, lost her Habitat for Humanity home when Tropical Storm Harvey’s flood waters made their way into her house. She also lost her car.

“She is rapidly running out of money that FEMA (Federal Emergency Management Agency) gave her,” PAPD Det. Mike Hebert said.

Some help has come her way. Operation Blessing International, a nonprofit humanitarian organization, came in and did some work. Her case was chosen and the group came back a second time putting up sheetrock, wall preparation and painting.

“If not for Operation Blessing I don’t know where we’d be,” Hebert said. “When we showed up at her house (after the flooding) it was toxic. The Operation Blessing volunteers, there was even a girl from Switzerland helping, they did an amazing job. Then they came back with some help from the Cleveland Indians.”

While many suffered damage to their homes or even lost their homes, some did not. Hebert hopes that those who were not affected can step up to the plate and help Johnson in her time of need.

“There are people who went through this hurricane unscathed,” he said, adding that his home was not damaged. “I feel it’s my responsibility as a Christian and as a Catholic to help those in need.”

Hebert walked toward the master bedroom and bathroom — these are the rooms he hopes to make habitable for Johnson first. Then he will work on the rest of the house.

Like other Port Arthur residents Johnson had to be rescued by boat from her home. She flew out on a C-130 plane to Dallas then later stayed at the tent shelters outside the Robert A. Bob Bowers Civic Center. Currently she’s living in a hotel room that costs about $700 per week with the help of FEMA but that money is running out quickly. In order to get more FEMA assistance she would have to spend all of the approximately $2,000 she has — a sum that goes quickly with hotel fees, car rental and other necessities and her home is not ready. Hebert estimates she will be out of money in about three weeks.

Johnson, who is blind in the right eye, suffers severe allergies and breathing problems and must make weekly trips to doctors in the Houston area. It wasn’t always like this — she once worked at DuPont in Orange.

She first met the a few of the officers when she moved to Villa Main Apartments then she got to know a few more. She moved around the city a bit and was approached to be part of a neighborhood watch group and has worked with the group every Mardi Gras making rounds to make sure vehicles are not broken in to.

He hopes to schedule a cleanup day at Johnson’s home some time next week. The home still needs some interior doors bought and installed, sinks, cabinets, flooring, appliances, a hot water heater and more.

“We need volunteers, civilian volunteers too. If we can just get this room accomplished this upcoming week,” he said.

Hebert said he and others had thought of holding a fundraiser but there are so many others affected by Harvey.

“We talked about doing a fundraiser for Ms. Cherry but it’s so hard,” he said. “So many are hurting, some are worse off. There are probably thousands of Ms. Cherry Johnsons out there and now she’s dealing with anxiety issues.”

The anxiety stems from worrying about her future — when will she be back in her home, how will she continue to live in a motel, what does she do when all of the money is gone and she still has needs, plus she has missed several doctors appointments already.

“I’ve never been through anything like this before,” she said. “I’ve seen a lot of people go through this before and wanted to help everyone but couldn’t help. Now I’m put in a position, I know what they felt. You lose everything. Your memories.”

Hebert assured her she would make new memories at her home once it’s repaired.

Persons wishing to volunteer to help Johnson can call the PAPD at 983-8680.