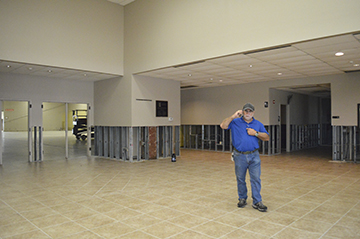 Adam Saunders, director of the Robert A. “Bob” Bowers Civic Center, speaks on the phone as he walks through the gutted facility on Tuesday. Events there have been canceled through the end of the year as the city of Port Arthur deals with repairs. Mary Meaux/The News

Civic center down, but not out; events canceled through the end of the year

Yes, the parking lot is filled with tent shelters for residents who were displaced by Tropical Storm Harvey’s flooding, much larger tents act as feeding areas and recreational vehicles are lined up for federal workers. 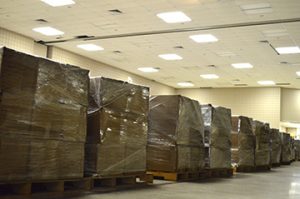 Stacked of wrapped boxes hold books from the Port Arthur Public Library at the Robert A. “Bob” Bowers Civic Center while the library is being repaired following Tropical Storm Harvey.
Mary Meaux/The News

Though the outside of the facility located at 3401 Cultural Center Drive seems untouched it’s the inside —where couples in formal wear have danced, costumed children celebrated their heritage and civic groups held fundraisers — that shows the extent of the damage that has caused the doors to be closed at least through the end of the year.

“There are no numbers right now,” Risa Carpenter, public information officer for the city of Port Arthur said regarding estimated costs of damages and cost of repairs. “It’s in the remediation process and we are trying to make sure we have all the guidelines that need to be followed. It’s also a process. What people need to realize is that we have to deal with FEMA (Federal Emergency Management Agency) too. We are moving along in the process. The city is moving at as quick of a pace as they can.” 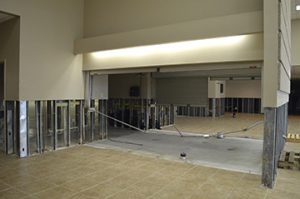 The concession stand area of the Robert A. “Bob” Bowers Civic Center has been gutted due to the flooding.
Mary Meaux/The News

Standing inside the 18,000-plus square foot main room, civic center director Adam Saunders pointed out a section where boxes of books are stacked and stored as the Port Arthur Public Library — which is located in front of the civic center — undergoes repairs. Another much smaller section has folded chairs stacked together along with some boxes. This, he said, is what was salvaged from the offices inside the civic center. Besides the civic center staff, the building also houses the Port Arthur Convention and Visitor’s Bureau. Several trailers are set up out back to be used as offices. The only wait on this is getting internet hooked up.

“We are moving forward and making sure we do this responsibly,” Saunders said.

The calendar of events through the end of the year had to be scrubbed and right now there are a lot of unknowns.

“We still have a lot of questions and are trying to be responsible in the decisions we make,” he said.

The civic center lost a majority of its equipment, tables and staging area. The tall dividers that fold out to

separate the space into rooms were also damaged and will have to be taken out and replaced.

“That’s a lesson learned after (Hurricane) Rita. They hold moisture a while,” he said. “They weren’t replaced at first then mold was fund and they had to be replaced.”

Hurricane Rita, which struck in 2005, severely damaged the civic center and led to it being closed for almost two years.

The civic center hosts a number of events throughout the year including Beans and Jeans, a fundraiser for Mardi Gras Krewes and the first get-together of the season, the Majestic Krewe of Aurora’s Grand Ball, the Mexican Heritage Fiesta and the Greater Port Arthur Chamber of Commerce annual meeting as well as the Port Arthur Rotary Club’s Taste of Gumbo Etc., Blue Santa toy distribution, exotic bird shows, gun shows, weddings, quinceanera’s and class reunions to name a few.

But the public library, which offers educational programs, access to the internet and of course, books, is a more pressing issue when it comes to reopening a city facility.

“The books are stored here until they (library) get up and running,” Saunders said. “We feel like the library is a daily use facility and some tell me it’s the inly place they have access to the internet.” 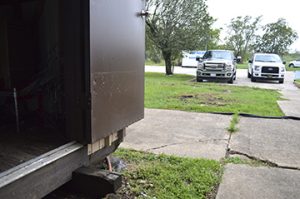 A water line is visible on an open door to a shed outside the back of the Robert A. “Bob” Bowers Civic Center.
Mary Meaux/The News

Saunders and staff have been busy at the city’s disaster distribution center on Houston Avenue and were on hand during the historic flooding. Upwards of 600 evacuees were brought to the facility when the water began coming in through the back doors. At first it was several inches then it filled up quickly.

“We got everybody off the floor and to the bleachers, it rose to about knee deep,” he said. 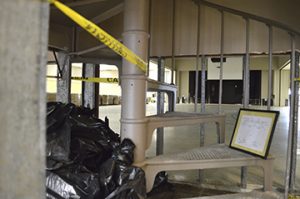 The Robert A. “Bob” Bowers Civic Center as seen through the stairwell to the projection area.
Mary Meaux/The News

Those evacuees were then evacuated to a different shelter and the flooding continued.

Now, the building is dry and environmentally safe, he said.

The waiting will continue until the city has the answers it needs.

Giving kids the right tools to go back to school