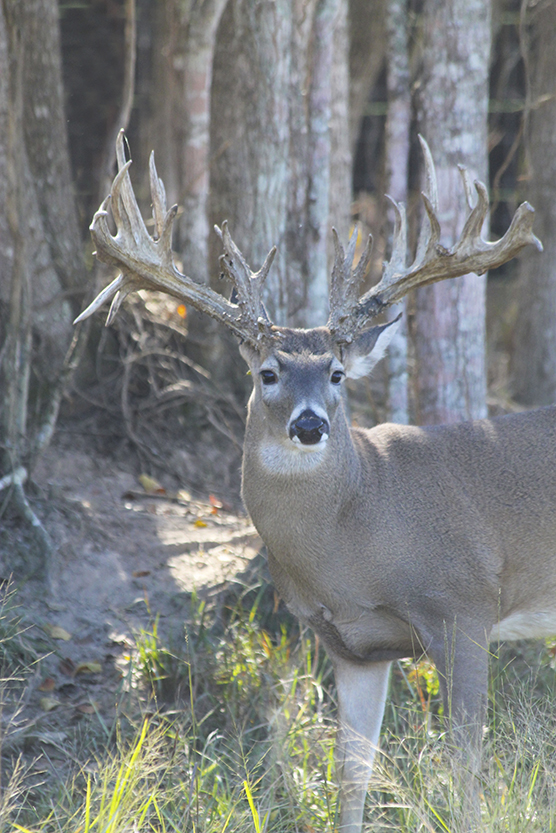 Chester Moore Jr./For The News Big whitetail bucks like “Diesel” from the Swenson Whitetail Ranch are some of the most impressive animals on the planet. Southeast Texas is not known for big whitetails but there is at least one monster roaming the area according to the author.

It was the biggest whitetail buck I had ever seen.

Crossing the road with its head held high, the buck’s antlers towered over it as it slipped into the woods and disappeared into the night.

I have seen and hunted whitetail in the trophy antler rich South Texas brush country, Kansas, Nebraska, the Dakotas, Michigan and upstate New York and I have never seen a big buck this big.

It was tallest rack I had seen and at least 24 inches wide, perhaps wider and most likely sporting 12 points.

And it crossed a road in a heavily wooded area in Southeast Texas last week.

I had been out documenting how the floods from Hurricane Harvey impacted local wildlife and wildlife habitat.

And just as darkness fall and I headed home the buck slipped across the road.

It also has obviously slipped out of the grip of the catastrophic flood.

That particular area near a deep slough had trash eight foot into the trees indicating the depth of the water that hit.

And the thing about Harvey’s floodwaters is that it hit quickly. It wasn’t a steady rise like a typical river flood. As all of us who live in the region know it was fast.

It caught us off guard and it no doubt caught wildlife off guard as well.

On both the east and west bound lanes of Interstate 10 near Rose City were two whitetails road killed or perhaps that drown in the floodwaters. They didn’t look smashed and I saw them a few days after roads opened to Beaumont.

It would take some effort for deer to even get to that spot so my suspicions are they came in with the floodwaters.

There were a pair of big hogs hit on the feeder road off of Interstate 10 in Orange and I got dozens of reports of coyotes, opossums, raccoons, foxes and other small game showing up in people’s yards and floating on debris during the crisis.

Most animals are excellent swimmers and others can climb so a short-term flooding event allows must to survive. No doubt some perished during the immediate impact but most survived.

The woods, marshes and prairies of our region are harsh places. They are beautiful but harsh.

One wrong step for a deer and it could become prey to a coyote or a cougar.

Every day is a test of survival in the wild so while events like we just faced add extra pressure they are simply part of the surviving beyond the pavement.

That big buck thrilled me.

Not only was it gigantic, it wasn’t crossing a road in some area profiled in whitetail hunting magazines for producing huge racks. It was here at home in Southeast Texas.

And it just survived the worst flooding event in U.S. history.

That not only gives me hope for wildlife in the aftermath of this historic event but for wildlife overall in Southeast Texas. I will probably never see that buck again but just knowing it exists gives me more resolve to keep a focus on wildlife conservation and to share the wild things that happen in my often very wild life.

To contact Chester Moore, e-mail him at chester@kingdomzoo.com. You can hear him on “Moore Outdoors” Fridays from 6-7 p.m. on Newstalk AM 560 KLVI.