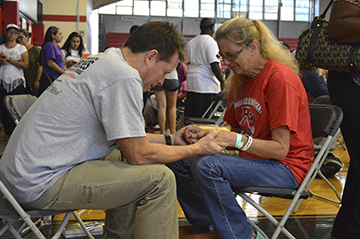 Volunteers come together to show some love to Port Arthur

Standing in a long line in the hot southeast Texas sun along with thousands of others affected by Tropical Storm Harvey’s catastrophic flooding, neighbors Marie Detrinidad and Cathy Freeman say they are blessed.

Yes, they both were rescued by boat as so many others in the city of Port Arthur were. Their homes were destroyed along with their belongings and they endured the shuffle through various shelters; Detrinidad is now staying with an aunt and Freeman only recently found a hotel room to live in. 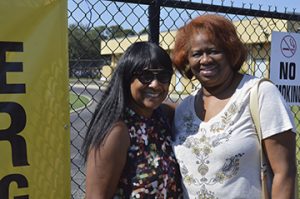 Port Arthur residents and neighbors Marie Detrinidad, left, and Cathy Freeman pause for a photo while in line for disaster assistance outside Memorial Stadium on Saturday. The Austin Disaster Relief Network was in town to help flood victims with needs.
Mary Meaux/The News

Yet as they stood in line outside Memorial Stadium on the Thomas Jefferson Middle School campus for assistance through the Austin Disaster Relief Network, they made small talk with others, shared laughter and stories on Saturday.

Detrinidad and Freeman was just two of 3,000 families who had registered in advance for the Love Port Arthur program. More than 1,000 others who had not registered were there also.

“We still have good spirits,” Freeman said. “God has a plan. We will survive.”

“We appreciate all of the volunteers and al who have been donating. We’re still blessed,” Detrinidad said. “Al of my belongings are gone and my house needs to be gutted but we’re healing.” 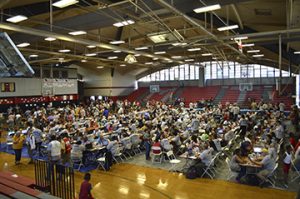 More than 1,000 volunteers from churches throughout the Greater Port Arthur and Austin areas combined efforts for the Love Port Arthur deployment.

Residents applying during the event have the opportunity to receive future assistance such as muck-out/clean-up, mold spray, rebuild and repair, financial assistance, emergency transportation and emergency housing. 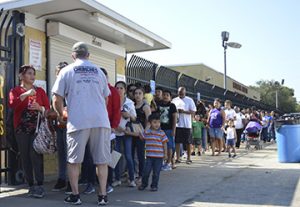 A volunteer with the Austin Disaster Relief Network distributes bottles of Gatorade to people standing in line to receive disaster assistance through ADRN outside Memorial Stadium on Saturday.
Mary Meaux/The News

A line snaked from the ticket area of the stadium and under the bleachers to one of the school gyms. Inside the gym residents were able to sit down with volunteers armed with laptops who helped them log in for assistance programs as well as sit down with chaplains to tend to their emotional and spiritual needs.

David Yeary, volunteer chaplain with ADRN from Austin, sat across from Kathy Dugas, hands locked in prayer. Afterward, he led Dugas to another long line that started at the far end of the campus where she, and many others, could receive other services such as free clothing, food, diapers and other items.

“People have physical, financial and emotional needs and a big focus of ADRN, as a Christ-based organization of almost 200 churches, is to help with emotional needs,” Yeary said. “That’s where the true strength comes from and what’s amazing is that it strengthens our faith. That’s why we do it.”

Yeary began volunteering with ADRN about six years ago during the destructive Bastrop fires. He realizes that people affected by disasters need the emotional and spiritual care. 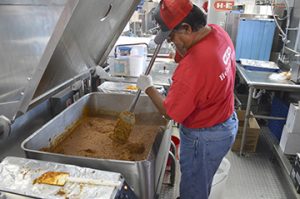 Luis Zapata, an H.E.B. partner, stirs galloons of chili that was scheduled to be fed to volunteers and disaster victims at Thomas Jefferson Middle School on Saturday.
Mary Meaux/The News

The H.E.B Mobile Kitchen was also on scene, all set up in the stadium parking lot and prepared to feed thousands of meals.

“This is what we do; we help,” Martha Barrera, public affairs specialist with H.E.B., said.

H.E.B. brought in the mobile kitchen, which is able to create large amounts of meals, an 18-wheeler with drinking water, generators for power, living quarters and restroom facilities for employees and more.

The San Antonio-based grocery company has been in the area feeding flood victims and brought water in to areas without water.

Over 80 percent of homes in Port Arthur were impacted by the flooding and hundreds more homes in the surrounding area were also damaged.

High water in a low land: Why we flooded—And why we might again, no matter what we do