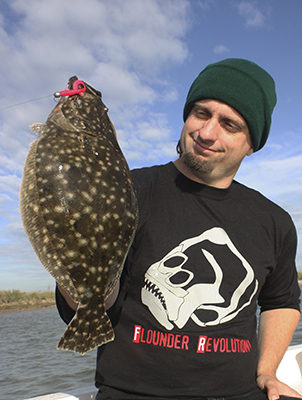 Lisa Moore/For The News The author has figured out several unique traits of the Sabine area fishery during his career as a wildlife journalist.

I first noticed it a decade ago.

Flounder were stacking up in the mouth of Bridge and Willow Bayou during the first week of September.

They were not as thick as they would be in another six weeks but there were lots of them and they bit with enthusiasm.

A small cold front just blew through putting the high that day in the upper 70s.

Those flounder were not “supposed” be there in those kind of numbers. The fall migration out of the bays would not start until late October at the earliest.

But fish migrations don’t begin one day and end the next and this was a prime example of an early trickle of what would be a big migration.

Over the years of covering the outdoors on these pages I have noticed several interesting facts about our local saltwater fishing scene during the fall months.

Continuing with flounder the biggest flounder of the year are caught the day before the first cold front arrives and about two days after.

Few anglers get out on the time before due to high winds but those who make a way usually produce epic catches.

I learned this from the late Capt. Phillip Samuels who stumbled into this and it proved true every time someone gave it a try.

There is something that happens with those big super-sized flounder as that first “blue norther” arrives.

Later in the fall, usually around the first week of December there comes a point where redfish schools move super-fast. Fall redfish usually move a lot faster than they do during the summer but during late fall they move so fast it can be nearly impossible to keep up with them with a trolling motor.

It is best to spot them, figure out their trajectory and try to intercept them instead of pulling right up to them.

A close cousin to the redfish, the black drum starts moving into the system in November in large numbers.

The huge spawning-sized bull drum start moving into places like the Entergy Canal and at various spots along the Sabine-Neches Waterway.

These monsters can weigh upwards of 50 pounds and although they must be released due to regulation restrictions they are super fun to catch.

The best chance at catching trout measuring up to around 25 inches can be found in the marshes along the Louisiana shoreline. Up until the first cold front the mouths of the bayous into the first half mile can produce good catches of trout with the best bite typically early in the morning.

Look for concentrations of shrimp to find the best specks.

There are some nice trout to be caught after the big fronts hit but the really big ones seem to disappear for a while.

Speaking of specks, you can catch larger than average ones during the fall but foregoing the smaller ones kicking up shrimp on the main lake and attracting gulls (and lots of other anglers) and looking for more subtle action along the shorelines.

Look for a few shrimp skipping on the surface along the Louisiana shoreline with maybe a bird or two.

These usually represent small schools of trout and I have found they are bigger than the ones everyone is fighting for on the main lake.

Most experienced anglers in this area have their own tidbits that help them catch more and bigger fish. I hope these help you.

To contact Chester Moore, e-mail him at chester@kingdomozoo.com. You can hear him on “Moore Outdoors” Fridays from 6-7 p.m. on Newstalk AM 560 KLVI or online.