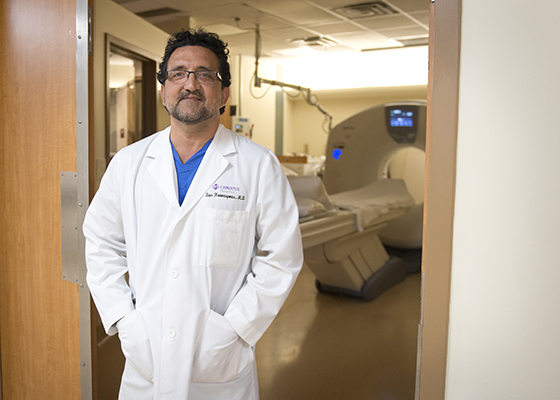 Dar Kavouspour has been a trauma surgeon at Christus St. Elizabeth Hospital for over 20 years, and worked through the duration of Tropical Storm Harvey. Colleen Harrison/The News

One local doctor has been through four hurricanes during his 20-plus years in the Port Arthur and Beaumont areas.

Harvey was, by far, the worst of them.

“This has been an unprecedented amount of rain,” said Dr. Dar Kavouspour, assistant director of trauma services and medical director of Med-Link Aeromedical Services at Christus St. Elizabeth Hospital in Beaumont.

As Kavouspour is no stranger to the effect hurricanes and tropical storms can have on trauma centers and emergency rooms, he said it’s policy for the trauma and ER departments to stay behind to help throughout the storms and their aftermath.

St. Elizabeth was lucky to avoid any structural damage —thanks in part to water pumps placed at the doors and barricades out by the street — Kavouspour said the only patients the hospital evacuated were the 17 who needed dialysis, a treatment made more difficult when the facility lost water for a period of time. The rest of the 250-plus patients who were staying in the hospital at the time remained there during Tropical Storm Harvey.

Once the rain stopped, Kavouspour said St. Elizabeth was inundated with patients; over a five- or six-day period, the hospital saw around 2,000 patients. The cases ranged from a variety of traumas — people falling off of roofs while trying to get away from rising water levels, injuries from lootings — to those who simply needed medication and people who were suffering from dehydration.

Kavouspour said the hospital was even getting transfers from the Houston area, since St. Elizabeth was the only full-service, full-staff hospital with ER and trauma services throughout all of southeast Texas that remained open through Harvey and its aftermath.

Through it all, Kavouspour said he, as well as just about every staff member in the ER and trauma departments, worked non-stop for about two weeks.

The trauma surgeon said what he’s most proud of are the St. Elizabeth employees who worked 72-hour shifts and beyond even as the storm ravaged their own homes.

“Everyone comes together in times like these,” he said. “Each one of these disasters, we’ve gotten better and stronger.”

While Kavouspour said his home sustained some damage in the storm, there are people he works with who have lost everything. He said these folks continue to come into work. He said their dedication, along with that of first responders, maintenance workers and other people who keep the hospital running, have been the driving force behind the facility.

“That’s what I was especially proud of,” he said. “This was a nonstop effort for days.”

While Kavouspour was one of those people working nearly nonstop during the storm and the days following, he said he’s not a hero.

“There are plenty of other people I would put way before me. I look at it as just doing my job,” he said. “People who worked nonstop despite losing everything deserve recognition.”

Kavouspour said if it wasn’t for so many different people and entities coming together in a group effort — nurses, doctors, maintenance workers, behind-the-scenes hospital workers, first responders, Christus having a plan in place for hurricanes and tropical storms —it could’ve turned into even more of a disaster.

“If it wasn’t for these guys, none of it would’ve worked,” he said. “That’s what separates this hospital from others in the area.”

By Josh Bergeron josh.bergeron@salisburypost.com When Harvey’s floodwaters inundated Port Arthur and surrounding communities, crews from across the country converged on the... read more