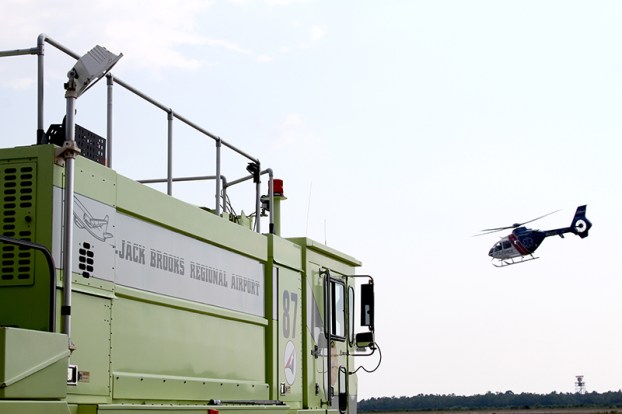 Submitted photo - A helicopter flies in front of a truck at the Jack Brooks Regional Airport following flooding across Jefferson County created by Tropical Storm Harvey. The Airport became a hub for rescue and evacuation efforts following Harvey.

When Harvey’s floodwaters inundated Port Arthur and surrounding communities, crews from across the country converged on the Jack Brooks Regional Airport and set up a rescue operation of an unprecedented scale.

From Aug. 30 to Sept. 10, records show 2,300 flights touched down at the Jack Brooks Regional Airport, said manager Alex Rupp. That’s more than double the average for the first half of the year, Rupp said. And it may not include all flights.

As airplanes and helicopters buzzed over the area, some flights weren’t logged, meaning the number of total “flight operations” could be more than the 2,300 number. Buses and cars transported evacuees and first responders, too.

“It was 24/7 for four or five days,” Rupp said. “Time runs together, but I know at one time we had so many aircraft on the ground that we had to shut down a taxiway to park aircraft … Our level of activity was tremendously increased.”

Rupp said the airport sold 100,000 gallons of jet fuel from Aug. 30 to Sept. 10, which is about 20 percent of what the facility would sell in an average year. Some of those sales include repeat purchases from the same aircraft, he said.

A number of the airplanes were military C-130s or helicopters, but private and commercial pilots also flew evacuees out of Jefferson County, said Rupp and Nederland Fire Chief Gary Collins.

Rupp and Collins said some of the crews who flew into or conducted operations out of the airport included: The Federal Emergency Management Agency’s Colorado Task Force One, National Guard units from multiple states, the Coast Guard, the U.S. Army, The Bureau of Alcohol, Tobacco and Firearms and Immigration and Customs Enforcement.

“You name it, they were there,” Collins said.

Operations roughly broke down into a few categories: humanitarian aide, search and rescue, observation and evacuations. Crews even set up a mobile hospital in a parking lot, Rupp said.

With such a large operation at the airport, staff received significant help from volunteers, many of whom were affiliated with Nederland High School. From laundry to cooking, volunteers performed a wide array of tasks, said Brian Swindel.

“People just got in there and got after it,” said Swindel, one of the volunteers.

Volunteers showed a “selfless call to duty,” he said.

For his part, Swindel used a party bus to shuttle evacuees dropped off by helicopters at the airport’s older Jerry Ware Terminal to the newer terminal used for commercial flights.

First responders and crews at the airport also didn’t have a way to shower, Swindel said. So, he shuttled people to Powerhouse Gym in Port Neches, which opened their facility for first responders to use.

First responders also needed somewhere to wash their clothes. So, volunteers at the airport collected dirty laundry, split it up amongst themselves and washed it in their own homes, Swindel said.

Rupp said volunteers also obtained air mattresses and cots for crews based at the airport to use.

“It was just such an awesome thing to see everybody working together,” Swindel said. “It didn’t matter whether you had a high income or what you did on a daily basis, you just assumed your role and got to work.”

It’s unclear exactly how many evacuees moved through the airport, but Collins estimates the number to be 4,000 to 4,500 people. Some left the airport in buses or cars. Many left by air.

“For a lot of these people, you could tell that they didn’t know what they were going to do,” Swindel said. “Literally everything they had worked for was under water … It was just kind of surreal.”

At one point, buses weren’t able to leave the airport because of rising floodwaters, Collins said. As a result, evacuees were placed on the buses, which had air conditioning and small TVs, until an airplane arrived.

Environmental Protection Agency trailers remain parked at the airport. Some, minor repairs need to be made to the facility, but airport operations are mostly back to normal, Rupp said. The airport, however, largely escaped the wrath of Harvey.

“If you look at the devastation that occurred in other areas, we were relatively unscathed,” he said.

The three Mid-County cities have found a way to handle debris removal as fewer and fewer sub-contractor trucks are available.... read more