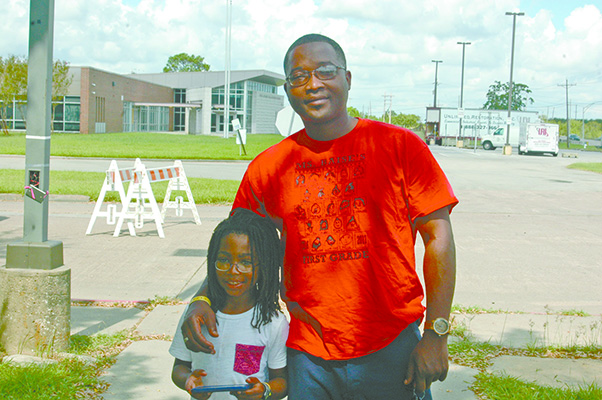 Fagan Win Sr. and Fagan Win Jr. pose for a photo outside a tent encampment at the Robert A. “Bob” Bowers Civic Center.

With evacuees from Hurricane Harvey now returning to Port Arthur, many residents are looking to rebuild their lives in the city they have long called home.

But not everyone will return.

This is the case for Fagan Win, who decided in the aftermath of the hurricane, he will look to start anew in a different city.

“We need a fresh start,” Win, 42, said about himself and his 7-year-old son, Fagan Win Jr. “I’ve got to start all over. I know whatever I lost, I can gain again somewhere else.”

For Win, this is not his first brush with devastation and this will not be the first time he has had to rebuild his life.

Originally from Louisiana, Win lost everything when his home was ravaged by Katrina. Since then, his life has been uprooted by hurricanes over and over again—something that has had an emotional impact on him and his son.

“We went through this before with Katrina, then Rita, and Ike, then Gustav, and now Harvey,” Win said. “It’s been tragic. I’ll be honest, I really want it to stop.”

“People say that hurricanes are extremely rare [in Fort Worth]. I can deal with that,” Win said. “I’m trying to get away from hurricanes.”

The most recent round of devastation happened suddenly for the Win family.

When Win’s home was flooded by Hurricane Harvey, the Wins were woken up in the middle of the night and evacuated to Fort Worth.

In Fort Worth, the father and son found aid and, they hope, a future.

“There’s more opportunity in [Fort Worth]. There’s more help out here,” he said. “That’s not to say they aren’t helping [Hurricane Harvey victims] here, but it’s better there.”

Though Win said it will be difficult for him and his son to adjust to a new home, he believes that the move, which was prompted by the hurricane, will ultimately be the best thing for his family and he added that his son is already enjoying life outside of Port Arthur.

“He’s getting a better education out there,” Win said. “At first, [my son] wanted to come back to [Port Arthur], because the teachers in Fort Worth were giving him more homework, but now he’s really enjoying it. It’s a little more advanced out there. It’s an improvement.”

He said the move to Fort Worth won’t be as hard for him as it would be for others, because he has had to completely uproot and rebuild his life after Hurricane Katrina.

Currently, Win has family members that are staying in a tent shelter in the parking lot of the Robert A. “Bob” Bowers Civic Center in Port Arthur. He is attempting to get his family to go with him to Fort Worth.

“They can get quicker help there, because there are so many damaged homes here,” Win said. “And there’s no way to get a hotel room. I’ve got a guy holding a room for them [in Fort Worth]. They will be a bit more comfortable if they come out there.”

If Win’s family chooses to stay in Port Arthur, that will not affect his decision to move to Fort Worth, he said.

No vacancies: Port Arthur continues to have lack of rooms