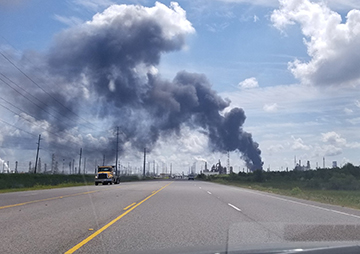 A fire broke out at Valero in Port Arthur Tuesday. There were no reported injuries or fatalities.

Fire breaks out at Valero facility

By Josh Bergeron and Jesse Wright
The Port Arthur News
A Tuesday fire at the Valero oil refinery in Port Arthur tossed a huge plume of black smoke into the sky that slowly drifted over the city.
A spokesperson for Valero said there were no fatalities or injuries in the blaze, which started at 11:50 a.m. It is not clear how the fire started. A brief shelter-in-place notice was issued to affected homes and schools, but that order was lifted by 2 p.m.
According to a statement from Valero, there were no immediate environmental concerns.
Barbara Phillips, a spokesperson for the refinery, wrote in a press release, “Air monitoring conducted by EPA and TCEQ both confirmed there was no negative off-site community impact.”
While emergency personnel battled the blaze, some roads were briefly closed.
On Tuesday afternoon, City Manager Brian McDougal said he did not have any details about the fire other than the fact that it occurred at a crude oil tank.
Harvey Gordon, who lives on the west side of Port Arthur, said he heard a loud explosion before the smoke began billowing from the oil tank. Gordon walked to West Levee Road to watch the blaze with several other onlookers, some of whom said they recently witnessed people working on the oil tank that caught fire.
Gordon said it’s not unusual to see fires at the Valero plant or other oil refineries in the area. He said there have been four or five such fires in the past two years. Gordon said there have been many fires at the refineries during his life, but lately they have increased in frequency.
Gordon, a lifelong west side resident, said there is not a good safety system to protect nearby residents in the event of fires at the refinery. On Tuesday, wind carried plume of smoke northeast, taking it over Gordon’s neighborhood and other parts of Port Arthur.
After a period of time watching the fire, Gordon began complaining of headaches.
John Beard, a former Port Arthur city councilman, was also among the onlookers. Beard said he works as an industrial firefighter and speculated that something happened to the oil tank that ruptured its seal.
Beard said he would like to see a buffer zone for the west side neighborhood. Specifically, he said, the company should purchase houses closest to the Valero plant.
“The people should not have to endure this,” he said.
After about an hour, black smoke from the oil tank fire began to turn white, indicating the blaze was under control, Beard said.
At one point during the fire, a loud, roaring noise began emanating from the refinery. Onlookers speculated it sounded like workers were depressurizing part of the refinery to help with the fire.

By David Ball david.ball@panews.com BEAUMONT — Some Jefferson County residents were curious if the timing was right to give county... read more