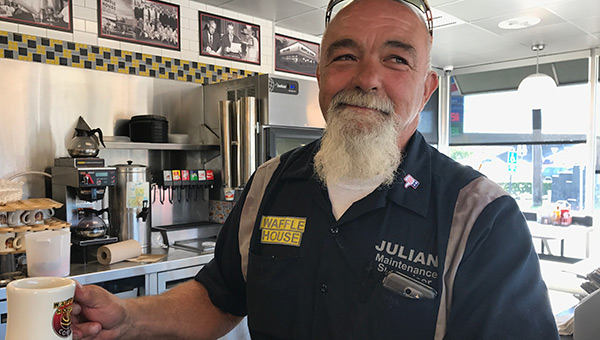 Julian Danner works maintenance for Waffle House. In the aftermath of Harvey, he helped get 11 of the restaurants reopened.

Julian Danner has worked hard in recent days to give the Federal Emergency Management Agency a green light.

Former FEMA director Craig Fugate described the agency’s Waffle House test in this way on a 2016 episode of NPR’s podcast, Wait, Wait … Don’t Tell Me: “They are open most of the time. And that was the index. If a Waffle House is closed because there’s a disaster, it’s bad. We call it red. If they’re open but have a limited menu, that’s yellow,” he said. “If they’re green, we’re good, keep going. You haven’t found the bad stuff yet.”

“We had three stores up and serving food almost immediately,” Danner said Friday afternoon as he paused for a cup of coffee at the Waffle House on Jimmy Johnson Blvd. But it took until this Thursday to get all 11 fully operational, he said. 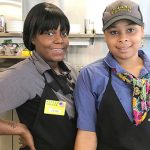 The company recently demolished and rebuilt its restaurant at that location, and the new facility had only been open a month. There was at least two feet of water in the restaurant at the height of Port Arthur’s flooding.

“As soon as the water went down enough that we could get here, we were working,” he said. “Waffle House corporate doesn’t play.

“We’re a franchise, but corporate sent teams from all over – Florida, Georgia, Mississippi and Louisiana,” Danner said. “Some of them left today headed toward Florida to see where the storm (Irma) goes.”

The Jimmy Johnson Blvd. store was closed for four days, reopened with a limited menu, and returned to full menu on Wednesday. Waitresses Jacobi Jackson and Chasity Only said customers were happy – and hungry. Jackson is a three-year Waffle House veteran; Only has only been on the job for two weeks.

Like many other business, Waffle House has dealt with the challenge of operating when many of its employees are displaced.

“Three days after the storm, we had about 50 percent retention of employees,” Danner said. “Now, we’re at about 80 percent.”

The Odoms also suffered personal losses, or likely their restaurants would have opened even more quickly.

“Our owners had nine feet of water in their house,” Danner said. “They had purchased $10,000 worth of generators to make sure all of the restaurants could get running, but they were in their garage and flooded with the house.”

As for Danner, he counted himself luckyl

“I had water up to front door, but not in the house,” he said. “I lost my Harley- they picked it up today. I am a part of Bikers for Christ, so it’s not just a motorcycle to me. It’s a tool for ministry.”

As for being able to give FEMA a green light, Danner gave a nod to all of his co-workers.

“We have outstanding crews at every location,” he said. “When they can, they come on in to work.”

Florida contractors keep eye on home as they work in Texas