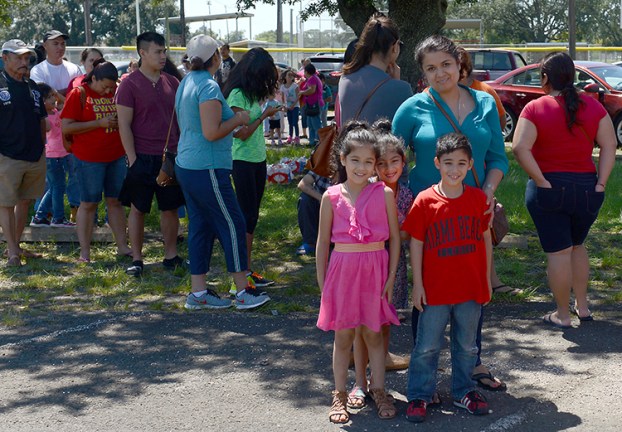 Roger Cowles/For The News Seven-year-old triplets Shelly, Juan and Ashley join their mother, Gricelda, in line waiting their turn at the FEMA trailer in the 1900 block of Ninth Avenue in Port Arthur. The trailer has been there for five days already.

Seven-year-old triplets Shelly, Juan and Ashley didn’t seem to mind standing in line at the Federal Emergency Management Agency bus Thursday in the 1900 block of Ninth Avenue in Port Arthur. Anyplace can be a place to play if you’ve got your two best friends with you.

But standing in line was not child’s play for their mother, Gricelda, who was waiting patiently with about 25 people ahead of her. With the help of a friend to interpret her words, the young mother said her family lost everything in the flood and she hopes FEMA will help with repairs of her house.

FEMA representative Alicia Powell said the bus has been in Port Arthur for about five days and it has not been determined how long it will be here.

“This is where people can apply for FEMA assistance. For those who have already applied, they’re doing updates for information they didn’t include in the beginning such as if they have other family members they didn’t have information on during the emergency. They’re also here for new applications,” she said.

Jeniqua Solomon said she had been standing in line for about one-and-a-half hours under Thursday’s clear blue skies. She said her house was flooded but she is making progress on her recovery.

“I’m trying to figure out the next step,” she said. “I’m hoping for a temporary shelter until the apartment is ready to move back in to.”

Joventine Cervantes of Port Arthur said his problem was with his Suburban’s electrical system after the vehicle was flooded almost up to the windows.

“I hope they can fix the problem,” he said as the line slowly inched forward.

Way back at the end of  the line was Erica Mitchell of Port Arthur. She owns a rent house that was flooded. She had already filled out an application for assistance online but had received a notice that her claim had been rejected. She was in line to find out if there is any assistance for a property owner like her.

Rita Egan, a FEMA spokesperson in Austin, said anyone who receives a rejection letter should read beyond the line that says “Your application has been denied.” It’s possible that additional information is needed before a claim can be approved.

The FEMA bus is typically open from 9 a.m. to 6 p.m. First-time claim applications can be filed at the trailer and previously filed claims can be modified or updated.

Registering online at www.DisasterAssistance.gov is the quickest way to register for FEMA assistance. Short-term housing assistance and other immediate funding is available to eligible survivors who register and may include short-term lodging at eligible hotels and up to two months of expedited rental assistance, according to information on FEMA’s web site. Information on other resources in the area, including available services from other federal agencies, will also be provided.

After lunch Thursday and the line of people waiting for assistance snaked down a driveway and around the back of the FEMA bus.
“I would give an estimate that since we’ve been here this morning probably 100 people have been through and there are about 75 more are in line and they just keep coming in,” Powell said. “It’s nice to see everyone coming with a smile and staying so positive.”

In hurricane-impacted areas, the Texas Department of Public Safety is encouraging persons concerned about the whereabouts of missing loved ones... read more