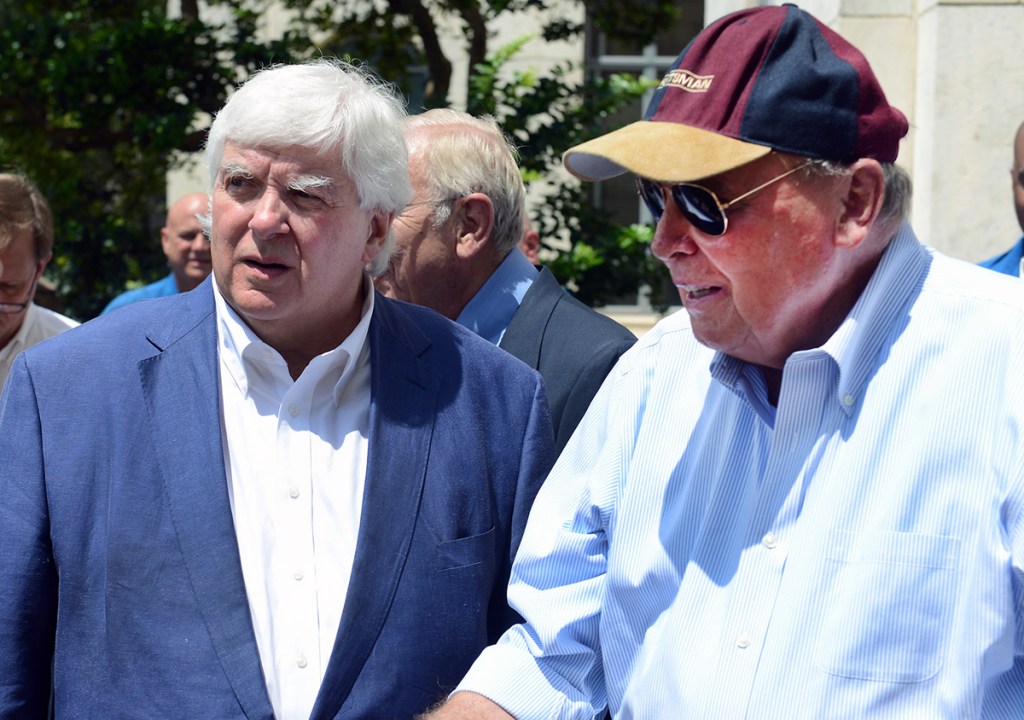 By Roger Cowles
For the Port Arthur News
Huntsman Corp. founder and Executive Chairman Jon Huntsman Sr. announced the donation of $2 million — $1 million from his family and $1 million from the Huntsman Foundation — to create the Huntsman Flood Fund.
Huntsman also issued a challenge that at least $2 million more be raised for the fund to help families in the Port Arthur-Beaumont area.
Employees of the Port Neches Huntsman facility joined their founder and a variety of elected officials on the Jefferson County Courthouse steps Tuesday as Huntsman announced the donation. He called his employees the “finest in the world” and said he had been to the Port Neches plant “to give the employees a hug” earlier in the day.
“We have nine plants along the Gulf Coast here so we have a lot of facilities. Every one of them was knocked out. But our team is such a great team and our associates are such great people that we want to start here in Beaumont and our family wanted to give a million dollars here to start with and our foundation wanted to add another million to that,” Huntsman said.
The Huntsman Flood Fund will be managed through the Beaumont Foundation of America.
“I’ve got my good friend Wayne Reaud and good old Buddy Low, who’s sitting here. They’re two of the three directors of the Beaumont Foundation and I’m the third,” Huntsman said.
“They’re a little shy about spending money so I know they’ll be more than anxious and willing and desirous and probably put close to a million dollars in to match us.
“Mr. Reaud will kick me in the shins afterward,” Huntsman said.
To continue growing the fund, Huntsman called on contractors his company has used over the years in Port Neches and Port Arthur to match his contribution.
“We always look more favorably on our contractors if they help us out a little bit,” he joked.
He said the goal is to have a $4-$4.5 million fund in as soon as two weeks.
“This fund is to be used particularly for school children for books, for clothing, for supplies, to rebuild homes, to do the things that are absolutely essential for families and for people who have lost everything,” he said.
Judge Branick, during his introduction of Huntsman, gave some illustrations of the magnitude of the carnage from Hurricane Harvey’s floods he said resulted from rainfall totaling 56 inches in three days in some parts of the county.
“In the city of Groves there are 6,000 homes immediately adjacent to the Huntsman chemical plant; 3,000 of those homes were severely damaged. In Port Neches, almost 600 homes were flooded. In the city of Port Arthur the counts haven’t even been able to be taken yet, but it’s going to be many more times the city of Groves, probably 10-20,000 homes that were impacted,” he said.
“It’s against the backdrop of that destruction that I was contacted many times by Mr. Wayne Reaud, who’s sitting over here, wanting to know what he could do to help. … It’s through his friendship and long relationship with Mr. Jon Huntsman that I learned of Mr. Huntsman’s concern for our area,” Branick said.
Reaud, a Beaumont attorney, pledged that he and Low will do the best they can to raise money for the fund. Then he praised Huntsman for his donation.
“Jon Huntsman is a great man. He has given away over a billion dollars and it’s hard to give away a billion dollars,” Reaud said.
Huntsman also has given $9.7 million for the flood relief outside of this area, most of it in the Greater Houston area.