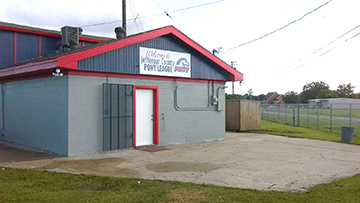 Jefferson County Pony League in Groves received some much needed rehab thanks to Lowes and volunteers with the league recently. Courtesy photo

GROVES — When R.C. Picou and wife Sarah began their involvement with the Jefferson County Pony League last summer they noticed the complex wasn’t in the greatest of shape.

Paint was falling off the bleachers and some of the wooden seating had to be hammered down between games and the wooden fencing around the fields was old and in need of repair.

“It’s been enjoyable and it’s been hard,” Sarah Picou said.

The Picous began looking for sponsors for the league, mostly staying away from big businesses.

“I had never thought of going to Lowes. They’re a big corporation, what would they want to do with little peons like us,” she said. “I was going shopping one day and the Holy Spirit said ‘go to Lowes.’”

“He was ecstatic to help the kids out,” she said. 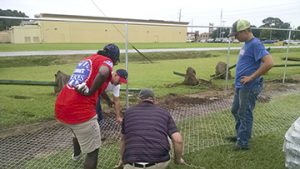 The folks at Lowes decided to make rehabbing the fields their Lowes Hero Project and, over about a month’s time, gave the fields a much-needed facelift.

“Anything the eye could see they took care of,” she said. “These are things we’d never be able to do, unless we somehow hit the lottery, and the league doesn’t play the lottery.”

Icet, who has been with Lowes for 18 years, said this was one of the biggest projects they have done.

“I could find no better way to give back to the community than to help the kids have a safe and fun ballpark,” Icet said. “When I was approached by the JCPL board president I knew this would provide an eternity of smiles knowing we did something great for the kids.”

Work at the fields was done in three phases and included prepping the areas for painting, then adding primer and the actual paintwork. More than 130 gallons of primer and paint were used, Mark Wilson, pro services specialist with Lowes, said.

Other work included replacing shingles, putting up new fences, new benches for dugouts and new signage. Every building at the ballpark was repainted including the bleachers. Lowe’s associates, and those that participate at the ballpark conducted all the work.

Wilson actually built the new benches for the dugouts then brought them to the field for installation. The benches and picnic tables were later stained.

Visitors to the field will also notice that the old, wooden fence is gone, replaced by new chain link fence. Sponsor signs are still there, as well as a new one designating Lowes Field.

The JCPL is for kids age 3-14. Last spring 115 to 125 children played but more and more are starting to become involved, Picou said.

In the spring, the league is open to those in Jefferson County but during fall ball it’s open to kids from other counties.

“We want to thank Lowes. We are so appreciative,” she said.

She also offered a special thanks to Wilson, who, along with his Members of the league’s board also was on hand to help.

The common thread of the project is community.

“I grew up in Groves and remember what this ball field was,” she said. “Baseball keeps kids out of trouble. It helps them be accountable in life. Baseball teaches way more than the game. “We’re trying to bring the community back together and get these kids involved and let them see there’s a future out there.”

A grand reopening of JCPL is set for 5 p.m. Saturday at the fields, 5800 West Washington Blvd., Groves. Signup for fall ball will also take place at this time then at 7 p.m. there will be a rag ball game between Lowes employees and league volunteers.