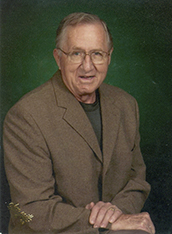 George Dodd Hodges, 81 of Nederland, passed away Friday, August 4, 2017 at The Medical Center of Southeast Texas in Port Arthur. George was born in Crosbyton, TX on October 27, 1935 to the late Harrison Hodges and Clarice Walsh Hodges.

George retired from DuPont as a supervisor. He was a member of Memorial Baptist Church of Port Arthur, where he served as a second-generation deacon for many decades. He loved hunting, fishing and golf. He loved his kids and grandkids and grilling for them in the backyard.  He had a passion for camping and traveling the United States, especially the National Parks. To his family he was famous for his biscuits and gravy.

A gathering of family and friends for Mr. Hodges will be held from 2:00 p.m. to 4:00 p.m. Sunday, August 6, 2017 at Melancon’s Funeral Home. Funeral service will be held on Monday, August 7, 2017 at 10:00 a.m. at Memorial Baptist Church located at 4011 Memorial Blvd, Port Arthur. Interment will follow at Greenlawn Memorial Park in Groves.

In lieu of flowers, memorial contributions can be made to Memorial Baptist Church in Port Arthur, TX.