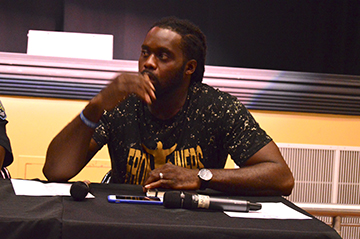 Colby Hamilton, the founder of FRONTLINERS, speaks about the importance of home ownership Saturday at an NAACP event. Jesse Wright/The News

Local leaders in the African-American community came together to take on some tough topics facing their community Saturday.

The conversation was wide-ranging but focused mostly on how to improve the African American experience in Port Arthur. And while the questions and suggestions were many, there appeared no easy solutions at Saturday’s event.

A common thread in the topics was infrastructure —which goes beyond the basic definition of streets and roads and bridges, but to all of the things that support a city including education and healthcare.

One question posed to the five-person panel gave a nod to the industrial goldmine that is the petrochemical plants of the area. The person asked how could the city be grown with less dependence on industry.

Porterie first thanked industry for what is has meant to our city and noted that many of his generation’s parents worked in refineries.

“The most important thing is to build infrastructure,” Porterie said. “Education is the key. There are all types of careers our children can go into. Education will free you; education will give you choices and options. Yes, we appreciate all the refineries in the area but not every child in the district wants to be in industry. It’s important to have options.”

Gardner and Hamilton spoke of how African Americans need to support one another by shopping at their businesses.

Another question posed asked how to stimulate progress in the city. Winston, who has been in law enforcement for numerous years and is also a pastor, said that African Americans can come together, pool their resources, and one day put an H.E.B. or Chick-fil-a on Houston Avenue or a beauty salon or strip mall on the West Side.

“With this we can empower people and hire people and unify,” Winston said. “But our resources are not together. You can say what you want but money talks.”

Officer Carter, who had to briefly leave for work but returned, said she sees the community from a different side. She works in schools three to four days a week and patrols the poorer areas of town as well.

“It’s going to take everyone, not just law enforcement, to get kids back on track,” she said. “Some kids go to school but their not there, not focused. They’re scared. They’re upset.”

She also tackled the issue of parents using law enforcement as a way to make their children behave out of fear of arrest.

“Teach your kids they can approach a police,” Carter said, adding she understands there is some reluctance to trust and approach the police in some communities. “I’m Officer Carter. I’m not like that. I go to war for these kids.”

Winston also spoke of crime and those who don’t want to be involved or be a snitch, harkening to the recent violence and a homicide at Louis Manor Apartment Complex that is mostly done by people from outside the complex.

“Nobody has said anything about it,” Winston said. “Here we have a man who bought a housing complex and removed the security.”

He said that in other cities, people will call the police if they see a strange in their neighborhood but this doesn’t happen in Port Arthur.

“That has got to change,” he said.

Carter put it bluntly when she addressed the violence.

“We kill each other. Then we post to social media because we want to share the drama but something like this (the community discussion) I saw maybe six people sharing it,” she said. “That’s something that needs to change before the city can be a better place.”

Porterie summed it up solemnly by recalling a TV news report where a woman was interviewed following a murder outside her apartment complex.

“One of the saddest things, about two weeks ago, there was an incident, a murder. This beautiful young lady, who was smiling, said ‘we’re used to this.’ How sad that we have young people say we’re used to this. It didn’t seem to affect her to where she was scared. Who becomes accustomed to murder? Is this the type of city we live in where we’re used to certain behavior? It shouldn’t be,” he said.