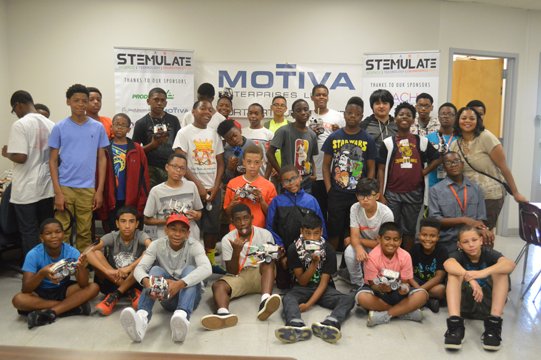 The boys from Camp Stemulate gather together for a photo op with camp director Sonia Freeman (right). (Lorenzo Salinas/The News)

Science fiction became reality as children built robots and battled them for bragging rights and for their own amusement Friday.

And whether they suspected it or not, they were also learning about science, technology, engineering and math. 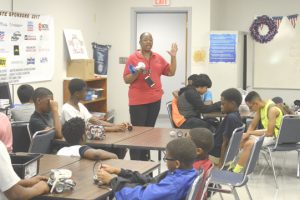 Camp instructor Sonia Jordan preps the class for a post-test before they enter the quarter finals of their robot battles. (Lorenzo Salinas/The News)

REACH held its first-ever Camp Stemulate at Lamar State College-Port Arthur, where the STEM in Stemulate stands for Science, Technology, Engineering and Math. The camp treated middle-school students to courses in robotics, programming and other science-based endeavors, as well as field trips and overnight stays in college dormitories.

Sonia Jordan, the camp instructor and program director with Kids Xplore in Houston, was the STEM teacher for the summer camp.

“We modify robots for quarter and semifinals,” Jordan said as several students were fine-tuning robots on their classroom desks.

“First, we built robots that all looked the same — so the kids could learn building principles and programming. Then, we modified the robots in three different ways.”

“Once everything’s connected, we have to finalize settings and control,” Jordan said.

Jordan and the class announced in unison that they have learned binary code, ways in which computers talk to each other and how to make video games. 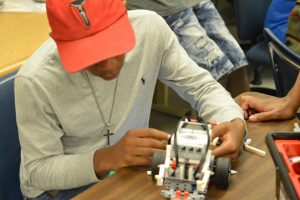 A middle-school student makes some last-minute adjustments to his robot before entering it into the quarter finals. (Lorenzo Salinas/The News)

“For me, this program provides a foundation for kids. It’s just getting them an introduction to robotics and helping them get a feel for what they’re good at,” Shannon Freeman, camp director, said. “Some excel at math or science…so this camp plays to each of their different strengths.”

Freeman said she’s seen children who had previously not smiled before in the classroom suddenly light up when they learn, program or play with robotics and technology.

“It builds confidence for them,” Freeman said. “And shows them what they’re good at.”

Freeman said the majority of children at camp were nominees from local schools like Abraham Lincoln, Thomas Jefferson and Sabine Pass. Their teachers and counselors selected the children for their academic and disciplinary performances in math and science.

Additionally, even though the camp cost $1,200 a child, Freeman said each of the nominees only had to pay $45 for the five-day overnight camp.

“The sponsors we have are great. Most of them paid for an entire child or two,” Freeman said. 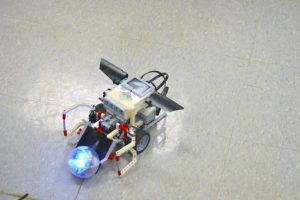 One of the battling robots practices on catching a LED ball. The robots were created with Lego software. (Lorenzo Salinas/The News)

The Stemulate Camp hosted 80 children — 44 girls and 36 boys in two different camps. Their activities differed. For instance, the girls’ camp focused on sensory jewelry and LED earrings while the boy camp battled robots.

Freeman said securing sponsors was imperative to the success of the program, as well as finding the right teacher for both the girl and boy camps.

“We wanted to find a teacher that could provide a foundation for the kids,” Freeman said. “And that’s who we found in Sonia (Jordan). She has a STEM academy in Houston.”

In addition to science, robotics and math, Freeman said the children were taken on field trips to go bowling, swimming and to a community play in the area. Their five-day stay at Lamar’s Seahawk Landing also afforded them a glimpse into college life.

Freeman expressed hope that Stemulate Camp would build a foundation that would create “top-of-mind awareness” for youth wanting to go to college. 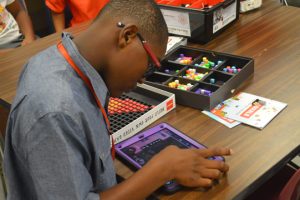 Alexander Jackson works on fine-tuning the connection between the iPad and the robot for the day’s robot battle. (Lorenzo Salinas/The News)

Jackson, who will be attending Thomas Jefferson next school year, said his favorite part of the camp has been learning and programming the robots they compete with.

“We’ve learned how to make video games and solder,” he said.

Jackson said after he graduates and receives a higher education, he would like to become a physicist.

Tyvon Woods, an Abraham Lincoln student, said his favorite experience of the camp had been both the robotics and the dormitory life.

“I learn about responsibility and how to make great friends,” Woods, 13, said. “When I (grow up), I want to be either a pastor or meteorologist.”