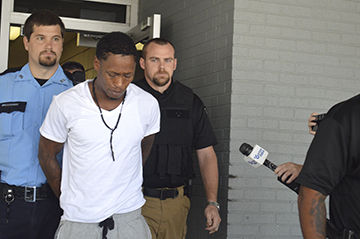 Port Arthur Police escort Isaiah Onasso Jacobs, center, out of the police station on a charge of the murder of his brother on Thursday. Mary Meaux/The News

A Port Arthur man was silent and tearful as he was walked out of the Port Arthur Police station on a charge of killing his brother on Thursday.

Police escorted Isaiah Onasso Jacobs, 28, to the waiting patrol car shortly before 1 p.m. — about 12 hours after his brother, identified as Ronnie Wayne Jacobs, was found unresponsive in a vehicle just outside the Joe Louis Apartment complex.

Officers were initially called to the complex for an automobile accident. When they got there, they found the driver of the vehicle unresponsive. He was sent to The Medical Center of Southeast Texas where he was pronounced dead a few hours later, according to information from PAPD.

“During the course of the investigation officers identified several bullet holes in the body of the vehicle. Medical personnel later identified a gunshot wound to his (victim) upper body,” Officer Mike Hebert said. “Approximately three hours later the individual was pronounced deceased by hospital personnel.”

Hebert said that at 11:08 a.m. an individual, identified as Isaiah Jacobs, voluntarily came to the Port Arthur Police Department and allegedly confessed to the murder of Ronnie Jacobs and placed into custody.

Other media has reported that the license plates on the vehicle the victim was in were reported as stolen. Police said the investigation is fluid and could not confirm that by deadline.