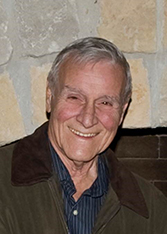 Bud retired as a manager from Sears after twenty-five years of service. He was a member of United Methodist Temple. Bud served in the United States Navy during the Korean Conflict and later served on the Kansas City, Missouri Police Force. He was also a member of Rotary International. Bud will be remembered as a good and faithful servant with a heart for Jesus and serving God. He was a volunteer with Community Care Prayer Outreach and his passion in life was prison ministry and Bluegrass Gospel Music.

Survivors include his wife of thirty-one years, Bonnie Burke of Nederland; son, Russell Burke and his wife, Lois, of Winston, Georgia; daughters, Melissa Cordray and her husband, Neal, of Houston and Tanya Payne of Port St. Lucie, Florida; granddaughters, Brittany, Kaylea, Ashley, and Amber; sisters, Lorrie Lasater of Independence, Missouri, Patricia O’Hare of Oak Grove, Missouri, and Priscilla Biskie of Nixia, Missouri; father and mother-in-law, Jerry and Dot Sonnier; several nieces and nephews; and a host of other relatives and friends.

He was preceded in death by his parents, Art and Grace Burke; son, Brian Burke; brothers, Art Jr. and Bill Burke; and sister, Carole Burke.

A gathering of Mr. Burke’s family and friends will begin at 12:00 p.m., followed by his memorial service at 2:00 p.m., Saturday, July 1, 2017, at United Methodist Temple, 4101 TX-73, Port Arthur. Cremation arrangements will be under the direction of Broussard’s Crematorium, Beaumont.

Memorial contributions may be made in Mr. Burke’s memory to Community Care-Prayer Outreach, 808B Nederland Avenue, Nederland, Texas 77627.