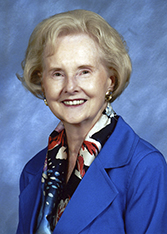 Edith was born on February 5, 1930, in Alto, Texas, to parents Lillian Pearl Monk and Willis Archie Bland.  She was born into a farming family and from a very early age was working in the fields as was common at the time.  She attended public school often coming home after the school day and working until dark picking cotton, vegetables, and tending to various animals.  Life during this time was difficult.  Edith did not live in a home with electricity and running water until she was seventeen years old.  What the family lacked in material possessions was offset by their love for each other and an undying faith in God.

Despite her meager beginnings, Edith was inspired to be the first in her family to attend college as a path from the struggles of her early life.  As such, she earned a B.B.A. in Education and Economics in 1952 and a Master’s Degree in Secondary Education in 1957 from Stephen F. Austin in Nacogdoches, Texas.  Edith worked tirelessly maintaining several different jobs so that she could work towards graduating.  Despite the demands on her time, she was also involved in many campus organizations and groups.

On August 4, 1951 she married Russell Coco, Jr. whom she remained married to until his death in 1993.  Despite the prejudice of an Anglo woman marrying an Italian man, Edith rose above it and had a wonderful forty-two years with her partner Russell.  The couple had one child, Christopher Coco.

After graduation, her husband Russell entered the Army and was dispatched to Korea.  Edith moved to Beaumont and lived with her in-laws, Russell Coco, Sr. and Margaret Coco on Avenue A.  There she learned the fine art of Italian cooking and getting to know her new extended family.  One of the true blessings of her life was the love and acceptance shown to her by the Coco family.

Edith and Russell eventually made their home in Port Arthur, Texas where they made many friends and were active in the community as well as St. Catherine’s Church.

Edith was a public-school teacher for thirty-six years.  During that time, she taught at South Park High School in Beaumont, Texas, Stephen F. Austin High School in Port Acres, Texas and Thomas Jefferson High School in Port Arthur Texas.  She took great pride in the impact she had on the lives of her students and enjoyed seeing all the amazing things they accomplished through the years.

Upon retirement from teaching, Edith was shown adversity with the illness of her son and death of her husband.  Edith did not waiver and was inspiration to many for her strength and determination to persevere.  These setbacks did not prevent her from fulfilling the promise of her life by traveling the world and seeing things that she could not have even dreamed of as a child.

In December of 2001, she was blessed with the arrival of her grandchildren, Isabella and Caroline.  Edith was so proud of them and was determined that they would have exposure to a life that she had not known until she was much older.  She enjoyed taking them to New York to attend Broadway shows, museums and restaurants.   She hoped that in some small way it would inspire them to enjoy the arts.  Her wish was granted as she so enjoyed watching them dance in recitals and other performances.

Edith’s favorite leisure activity was dancing.  She spent many evenings at the Pompano Club enjoying the music and the company of her friends.  Much to the chagrin of her son, she and her dance partners were known to enjoy dancing to Zona Jones at Cutters and other venues around town.

Edith was very passionate about being docent at the McFaddin-Ward House.  She very much enjoyed taking groups of people through the home and explaining to them the history of the house as well as Beaumont.  She especially loved Christmas where the house was decorated in its full grandeur.

After moving to Austin, Texas in 2009, Edith enjoyed attending musical programs around town and University of Texas sporting events.  One of her most enjoyable moments was meeting and attending a private house concert with Willie Nelson.

Edith was also very passionate about politics.  She often argued her opinions and was proud that in her entire life she had never once voted Republican.

While adversity did mark her life, it did not define it.

In lieu of flowers, the family asks that you consider supporting the McFaddin Ward House or the Museum of the Gulf Coast.