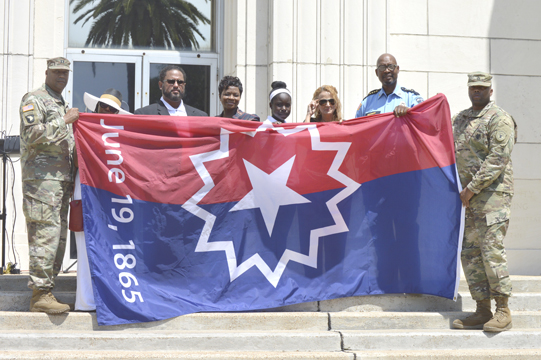 Representatives from the African American Cultural Society, Port Arthur Police, PAISD school board and the Army hold the Juneteenth flag on the steps of the Port Arthur County Courthouse. (Lorenzo Salinas/The News)

The Juneteenth flag was raised high on a bright and sunny day in Port Arthur as members from the army, police, city and African American Cultural Society gathered to celebrate. The event was held in front of the Port Arthur County Courthouse on Lakeshore Drive.

“This is the fourth year we have been raising the flag at the county courthouse,” Thibodeaux said. “We’re so fortunate to have a lot of uniforms here today.”

She spoke of the importance of civil liberties and its significance at the courthouse.

“As a librarian and serving in a humanitarian job, it is monumentally important to erect the flag in front of the courthouse,” she said, before elaborating on the importance of education.

“I’m passionate about not only teaching kids but helping them comprehend what’s going on around them,” Thibodeaux said. 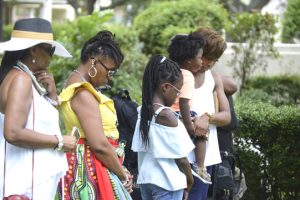 Joseph Guillory, trustee of the Port Arthur ISD board, was a guest speaker at the event.

Guillory briefly went over the meaning of Juneteenth Independence Day, wherein slaves in Texas heard the news of the abolishment of slavery. He pointed out the two-year period it took for the news from Abraham Lincoln’s proclamation to reach the state.

He read Maya Angelou’s poem “Caged Bird” for the benefit of the audience, drawing parallels between the current youth of today and Angelou’s eponymous bird.

“The meaning behind the poem, as put by Maya Angelou, is that it’s written based on oppression,” Guillory said. “It’s about voicing your concerns and standing up for what is right.”

Guillory said the poem was fitting because the community’s work was not done yet in regards to seeking freedom.

“Our children are trapped in a cage of their own minds,” Guillory said. He remarked that the way out of that was to be like the free bird and to seek freedom. 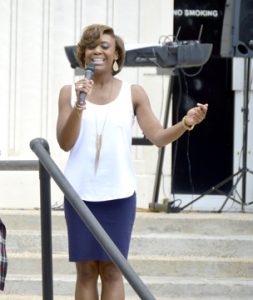 Tiffany Hamilton stands on the steps of the Port Arthur County Courthouse speaking for the Juneteenth celebration. (Lorenzo Salinas/The News)

Tiffany Hamilton was also on hand to discuss the importance of history, community and knowledge. Hamilton is on the board of the NAACP Youth Council.

She emphasized the importance of tying the history of Juneteenth to the modern day and becoming strong thinkers as a result.

“We need to do our part to search for information and to become strong thinkers,” she said. “We should be 99 years old and still want to learn something.”

Afterward Gail Pellum, president for African American Cultural Society, said why that was why it is so important for young people to celebrate Juneteenth.

She related the weight of 400 years of slavery and of African Americans having their identities, lives and cultures tore from them; as a result, how could young people not celebrate a holiday that promotes freedom. 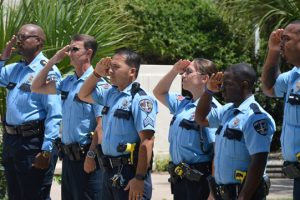 “The founding of this country had its roots in freedom from persecution. Everyone should do something to celebrate their freedom,” Pellum said.

Pellum said that even though slavery ended, it did not mean that injustice had ended. She cited the creation of the Ku Klux Klan, Jim Crow laws and segregation as just some of the injustices perpetrated against African Americans and minorities.

According to her, ignorance was the root of many of these injustices and gaining knowledge was the means by which to combat it.

“Knowledge is power,” Pellum said. “Especially when you know yourself and you know where you come from.”