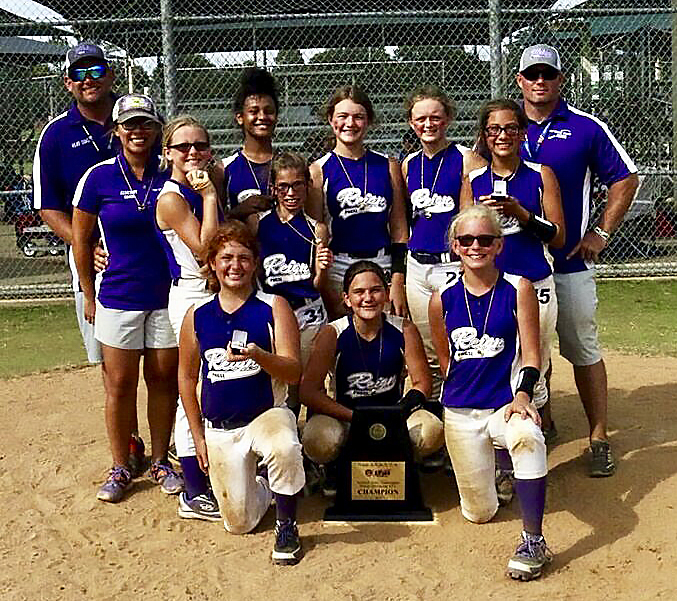 In the Port Neches-Groves area, something about playing on a diamond has really caught on.
The PNG High School baseball team would know a thing or two about that. So would the Port Neches-Groves Softball League’s Reign.
“I thought it was pretty awesome those guys did what they did and made the community proud,” said Reign coach Blake Balsano of the PNG baseball team.
Balsano is also beaming with joy over what the Reign recently accomplished in the same month, an achievement similar to that of the baseball Indians.
Balsano’s 12-under softball team won the Texas ASA/USA Softball state tournament last weekend in Brenham and has qualified for the national tournament, to be held July 14-16 in Sugar Land. Not only that, the Reign played four games back-to-back this past Sunday to win the tournament.
The Reign lost to a team called the Crush — Balsano wasn’t sure where they were from — but won their playback and beat the Crush twice in the championship round with only nine players. The Reign played with 10 during the regular season, but one moved on to select ball.
“This past weekend, everyone stepped up,” Balsano said. “When they got to the top three, everyone was really ready to go.”
The Reign have relied on the pitching of four players, Brylie Dartez, Bella Whitley, Bonnie Balsano and Katrice Harrington, in their title run. They went 6-1 in the tournament, which was their seventh of the season.
Blake Balsano added the team appreciates its sponsors and the parents for allowing him and his staff, including Ruby Balsano and Todd Smith, to work with the girls.
The Reign’s first opponent in nationals has not been determined.
•
I.C. Murrell: 721-2435. Twitter: @ICMurrellPANews