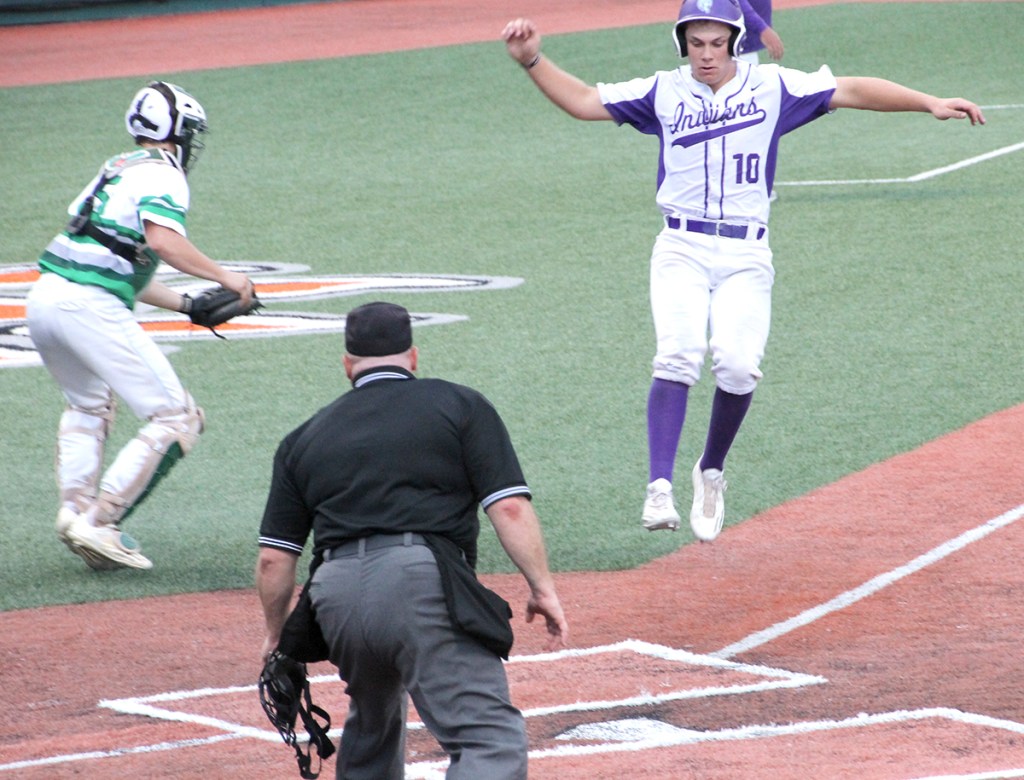 Austin Bost of PNG leads to avoid a tag and score on a two-run Nathan Vidrine double in the top of the third inning Wednesday in a 5-3 win over Brenham in Huntsville. (I.C. Murrell/The News)

HUNTSVILLE — Imagine the mood of Port Neches-Groves baseball seniors on their graduation night.

There’s not an air of concern among them going into Friday’s Game 2 of a 5A Region III championship series against Brenham. They just need one more win to go to Round Rock and the 5A state semifinals next week.

“Since we dropped the first game the last two series, we knew we had to come out intense today and get this first game and not get down one again,” senior Hayden Guerra said Wednesday.

Guerra played a big part in PNG’s 5-3 win over Brenham at Sam Houston State’s Don Sanders Stadium that night. He went 3 for 5, including a single on a hit-and-run play that broke a 3-all tie in the sixth inning.

“He’s been doing that through the year,” PNG coach Scott Carter said. “He got a little cold, but now he’s maybe heated back up.”

Game 2 starts at 6 p.m. Friday at Don Sanders Stadium. Should Brenham win that, Game 3 will start shortly after Game 2.

The regional champion will take on Grapevine or Colleyville Heritage in Round Rock. Grapevine and Heritage will begin their Region I final Friday at Dallas Baptist University.

Brandon Morse (8-2, 1.48 ERA) threw his third complete game of the season and second in the 5A playoffs with six hitless innings. He bounced back nicely from a three-hit fourth inning that produced all three of Brenham’s runs and faced only 20 batters combined in the hitless innings — two more than the minimum.

“I just wanted to hit my spots,” said Morse, who had a 0.93 ERA following a complete-game win over Barbers Hill on May 20. “Last week, I didn’t really do great job of that. [Wednesday], I had better command.”

Morse and Guerra are among 11 PNG players who will walk across the Montagne Center stage in Beaumont tonight receiving their diplomas. They may get a few more well-wishes from classmate and fans hoping the Indians (31-8-2) can secure the school’s first spot in a state semifinal since 2004 and reach the championship game for the first time since 2000.

“If you have a loss and you’re having to wait two days and going through graduation with a loss, that’s a pretty tough mental block,” Carter said.

As proud a moment tonight will be for the Indian seniors, the matter of surviving and advancing is still at hand.

Third baseman Austin Bost and shortstop Nathan Vidrine made Gold Glove-type stops in the fifth and sixth innings, respectively, to keep the Cubs (27-10-1) at bay. Both were diving stops; Bost was able to gun down Chandler Jozwiak at first and Vidrine snagged a line drive by Hunter Avila.

Davion Lockett reached base on a high throw from Bost in the Cubs’ seventh with one out, but after a flyout, Bost managed to turn a throw to first to end the game.

Brenham also delivered some long drives that sent left fielder Guerra and right fielder Trevor Martin back to the wall for catches.

Whatever it takes for the Indians to stay alive.

“It’s crazy the way we play as a team,” Guerra said. “Everybody doubted us this year and we just overcame so much adversity. It’s amazing to play after I graduate [tonight], so we’ll be playing after graduation. It’s a good feeling.”