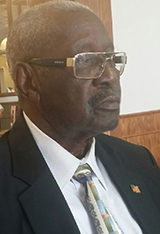 Deloyd Tommy Parker, Sr., 94, of Port Arthur, Texas, was born in New Iberia, Louisiana on July 2, 1922, as the oldest of 9 siblings. On May 24, 2017 in Houston, Texas, Brother Parker made his transition to peace and glory, joining his beloved wife, Ruby Lee Parker (a union that lasted over 65 years), 2 of his children and 5 of his siblings.  Elder Parker’s life was filled with love and that love is still present in the hearts, minds and spirit of those he has left behind that includes eight children, 35 grandchildren, 52 great grandchildren and 6 great-great grandchildren.

The Elder Parker was a soft spoken man, but his words of wisdom are part of the legacy he leaves for generations to come. He served his country with distinction as a soldier in World War II. Despite the racial atmosphere upon his return to the states, he continued to love and live a Christian life. Brother Parker was a dedicated family man and lived a Godly life. In addition, he served as deacon at First Sixth Street Baptist Church for over 60 years and worked at Gulf Oil Refinery, retiring after 33 years. As his wife, Sister Ruby, would say, “To God be the Glory and the best is yet to come,” as she welcomes her husband home. He will be missed by friends and family alike.