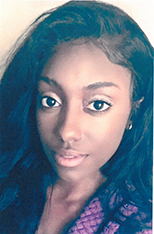 Angel Rose Preston, at the age of 25, took flight from this earthly life on Monday, May 1, 2017, to be with God her Heavenly Father.  Angel (musiqualrose) was a lover of music and song.

Angel was born on June 22, 1991, in Fort Worth, Texas.  She was a lifelong resident of Port Arthur, Texas.  She graduated from Memorial High School in the year, 2009.  At the time of her passing, she was enrolled in Vista College where she studied cosmetology.  Angel was a member of Antioch Missionary Baptist Church of Beaumont, Texas.  She was also a member of a singing group called “Chozen” that performs under the leadership of Ms. Mollyn Cole.

Visitation is scheduled from 9:00 am until 11:00 am Saturday, May 13, 2017 with funeral services following immediately afterwards at Antioch Missionary Baptist Church located at 3920 W. Cardinal Dr. in Beaumont, Texas with Pastor John R. Adolph officiating.  Burial will follow in Greenlawn Cemetery under the direction of Gabriel Funeral Home of Port Arthur.