Wade Phillips book signing has a little bit of everything 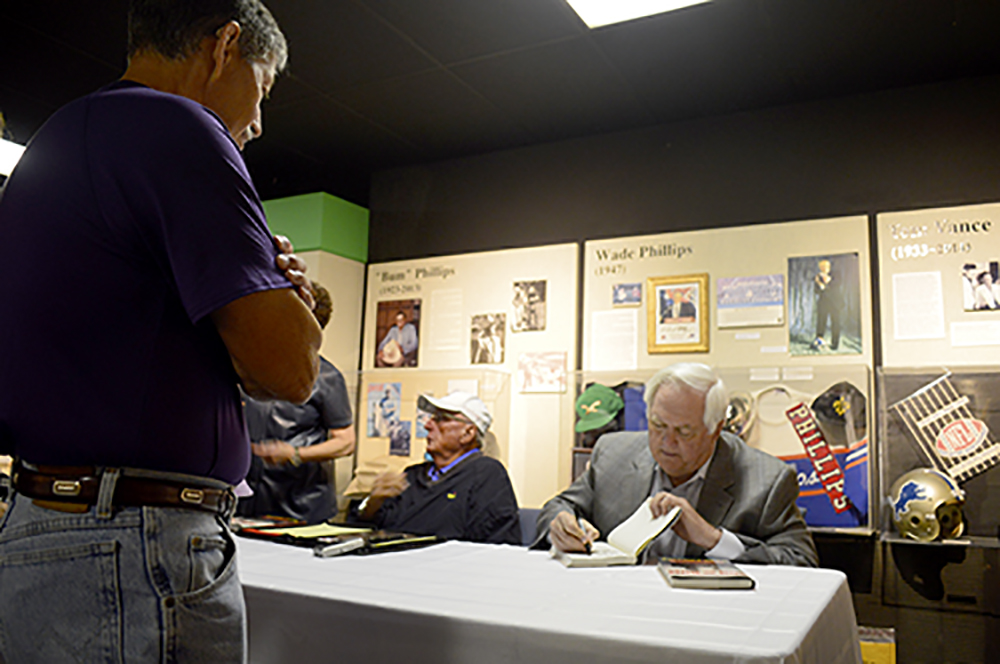 Wade Phillips autographs his books underneath a museum display of himself and his father.

In the final minute of Super Bowl 50, with Denver’s daunting defense having locked down a 24-10 victory over the Carolina Panthers, Broncos head coach Gary Kubiak walked over to Wade Phillips and said, “Your dad would be so proud of you.”

Those words, documented in Wade’s recently released book – Son of Bum, Lessons My Dad Taught Me About Football and Life – were sweet music to the ears of Bum Phillips’ chip off the old coaching block. Even at age 66, it was so important that he make his late father proud.

“What Gary said kind of finalized things for me,” Phillips said. “I knew we had the game won but I was still focused on coaching. When he said that, it struck me the right way. I could feel it. The words went right through me.

“I started thinking about my dad and I knew he would be proud. You always want your dad to be proud but in my case it was really poignant.”

Bum was no doubt mighty proud again Friday afternoon as he looked down on Wade’s book signing at the Museum of the Gulf Coast in Port Arthur. For starters, so many folks poured through that museum director Tom Neil had to make a run to Barnes and Noble in Beaumont to get more books.

But it was the ebb and flow and unusual things that transpired that made this day different.

“What a turnout,” Wade exclaimed about halfway through. “It was overwhelming, really,” he said as things wound down. “I knew some people would come but never expected that many. It really felt great. There is no doubt this is home. This was so special to me.”

The signing, done under Bum and Wade displays in the Museum, and next to their bronze busts, was Wade’s third in less than 24 hours. He’d been in Denver Thursday afternoon and Dallas that night. Ahead was Barnes and Noble Friday night in Beaumont and Saturday afternoon in Houston.

What played out at the Museum of the Gulf Coast was the book-signing version of Mid County Madness. Friends of Bum, friends of Wade, fans of both, former teammates, and just plain admirers streamed in from Port Neches, Nederland and Groves to get books signed, have pictures taken with Phillips and swap stories about the good old days.

It was so reminiscent of an afternoon a few years ago when Bum sat behind a table at the Holiday Inn on Jimmy Johnson Blvd. signing copies of his book – Coach, Cowboy, Christian. The way Wade related to one and all was eerily similar to how his dad was in the same situation. Both had a down-home blast.

One of the books Wade signed, in fact, was not his but Bum’s, and he signed right under his dad’s name. He also signed a 1953 Nederland yearbook next to Bum’s photo, a 1965 PN-G yearbook next to his photo, and right under that of his wife – the former Laurie Nunez – and even put his name on a 1980 program from the Bum Phillips/Bob Hope fundraising golf tournament for what was then Hughen School.

One Nederland fan came through and handed Wade a note that said, “You may have graduated from PN-G, but you learned to read in Nederland.” And a PN-G booster said one of Wade’s high school English teacher observed that he never wrote a paper in his life, so how in the world did he write a book.

The book signing was scheduled for 2 p.m. to 4 p.m. By the time Wade signed the first book for former PN-G basketball coach and football assistant Phil Vergara, the line snaked around displays of famous athletes from Southeast Texas and out of the main room for sports honorees.

While Wade was signing, Laurie was working the crowd with his Denver Super Bowl ring, giving people a chance to examine it, try it on and take a photo with it. Again, this was not your run-of-the mill book signing.

For instance, Laurie was asked to sign one of Wade’s books. The woman who made the request said, “Behind every successful man is a great woman.” Wade replied, “Laurie’s not behind me, she’s beside me.”

Nederland’s recently named head football coach Monte Barrow showed up to get a couple of books signed. So did the Bulldogs long-time defensive coordinator Delbert Spell. Phillips’ former PN-G and University of Houston teammate Mike Bowlin drove in from Galveston.

One of Bum’s all-time favorite players at Nederland, Leon Fuller, who would go on to star for Bear Bryant at Alabama, was represented by his sister-in-law. Mike Hebert, on behalf of the Port Arthur Police Deparment’s Blue Santa program, was able to walk away with two signed books and a signed Denver Super Bowl 50 football.

Since Son of Bum, written with Buffalo News sportswriter Vic Carucci, was just released this week, few of those showed up knew much about the content beyond some excerpts that had been published.

What they will be reading is a beautiful story about how much Wade Phillips loved his dad, learned coaching strategy and a unique philosophy from him, his successes and experiences at numerous NFL stops and what it’s like being fired.

There is some controversy, mostly being stirred in Dallas, over a couple of observations about Jerry Jones and Jason Garrett, an interesting revelation about former Cowboy coaching legend Tom Landry, a humorous look at how much one of Wade’s mentors, Buddy Ryan, hated offense and an up close look at how the Houston Texans came to draft JJ Watt.

Bum’s influence on Wade is woven throughout the book. Every chapter, in fact, is prefaced by one of Bum’s off the cuff quotes that contain equal parts humor and common sense. Such as, when Houston Oiler rookie Earl Campbell couldn’t complete the team’s mile run at training camp, and sportswriters wondered what he was going to do about it.

“If it’s third and a mile, we won’t give it to him,” Bum quickly responded.

There is much Mid-County will be able to relate to, starting from the very first page. The book begins with the night Bum died, Oct. 18, 2013. In that first chapter, Wade talks about how he was listening to the PNG-Nederland game when his dad quietly passed away with the teams tied 7-7 at halftime.

He goes on to write about Bum’s coaching days at both schools, about him playing for his dad at PN-G, about the rivalry, about a street named Bum Phillips Way, about the Bum Phillips Bowl between the Mid-County rivals and about the massive trophy that goes to the winner.

In the book’s final paragraph, Wade says, “As blessed as I am to have gotten that first Super Bowl ring, I’m even more blessed that I got to spend all of those years coaching with my dad.”