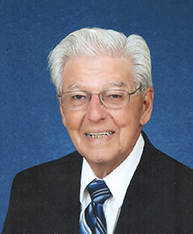 Walter was a lifelong Port Arthur resident and member of the United Methodist Temple. He retired from Gulf Oil after 42 years of service in the Human Resource Department.

Walter served in the U.S. Navy serving on the U.S.S. Cowell from the day it was commissioned till it was de-commissioned, making him a Plank Owner. He earned six medals, eleven stars, and a Presidential Citation during World War II.

He was a member of Cosmopolitan Lodge #872, Port Arthur-Mid County Shrine Association, Royal Order of Jesters, PANAC, Edison-Lee Neighborhood Watch, and Manager of the Port Arthur Club after his retirement from the Gulf.

Walter was preceded in death by his wife, Barbara Breaux; and son-in-law, Paul Trosclair, Jr.

Funeral services will be at 10:00 a.m., Thursday, April 27, 2017 at Levingston Funeral Home in Groves with burial to follow at Greenlawn Memorial Park.

A visitation for family and friends will be held on Wednesday evening from 5:00 p.m.-8:00 p.m. at the funeral home.