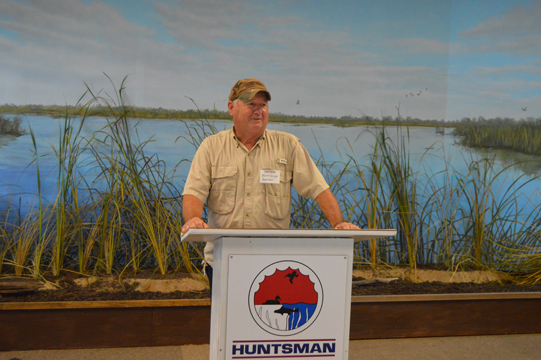 A preemptive Earth Day was celebrated Thursday in some lush, artificial wetlands surrounded by, of all things, refineries and industrial technology.

Marty Briggs, environmental specialist for Huntsman, said the company started its wetlands program 30 years ago, in which Huntsman built artificial wetlands in an effort to better manage and protect the wildlife and environment on its property.

“It has grown so much over 30 years,” Briggs said, before listing organizations that have contributed to Huntsman’s environmental stewardship like Texas Parks & Wildlife, U.S. Fish and Wildlife Service and Ducks Unlimited.

“It’s gotten so big, and we have signed license agreements with Port Neches-Groves ISD.”

“For the younger students coming up, they’re losing touch with their outdoor surroundings,” Briggs said. “That’s why we need to get involved with the schools.”

Briggs listed educational classes like environmental science and biology as important touchstones for young people to learn more about their everyday world, as well as more hands-on programs.

In particular, the finely made birdhouses on display at the event were a result of PN-G High School’s woodshop class and the vibrant Huntsman signs in the room were created by members of its art department.

“We try to involve as many classes as we can,” Briggs said. “And we try to get involved with other schools than just PN-G.”

He named school districts such as Port Arthur, Beaumont, Nederland and Bridge City.

“Our ultimate goal is to create a Neches Corporate Wildlife Coalition,” Briggs said, referring to a coalition of more local and state organizations that would protect and enable local wildlife.

“The major problem with wildlife is the land used,” Briggs said. “Any time you use property, the wildlife from that (area) will be displaced.”

Hence, the proposed coalition mentioned by Briggs would, in theory, utilize some of the 2,000 acres of land owned by Huntsman between Port Neches and Groves to act as a sort of safe corridor for wildlife and their migratory patterns during the year.

“It’s fairly new,” Briggs said of the corridor. “We’re only talking about it (inside) the plant.” 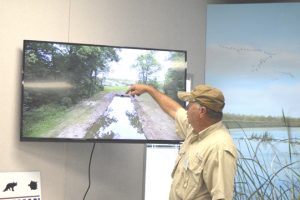 Marty Briggs, environmental specialist for Huntsman, walks the audience through a video presentation of the Huntsman wetlands. (Lorenzo Salinas/The News)

In the presentation he gave at the center, Briggs emphasized the respect Huntsman has for the local wildlife and their natural habitat.

“We’re involved with a lot of organizations, primarily PN-G,” Briggs said. “Most of what you see here has been a product of the partnership.”

He pointed out the large mural that served as the backdrop for the day’s speakers.

The mural was a lifelike rendition of the local wetlands complete with props, grass and what appeared to be actual mud used in its construction.

According to him, the mural was a multi-department project with the drafting class drawing up its design, the woodshop class constructing it and the art department painting it and putting the finishing touches on the props.

“We try to involve almost every aspect of it we can,” Briggs said.

In addition, he said efforts to start a birding club were underway between Huntsman and PN-G.

Regarding Huntsman’s water filtration and distribution systems, Briggs said they pump five million gallons a day at least. He explained this while walking the audience through a video presentation of Huntsman’s various wetlands.

“It’s all separated by levees and diverted into different cells,” he said. “A lot of the wildlife out there we have to manage. We want to manage a good and happy population.”

Briggs mentioned that one can see a lot of teal and other waterfowl use the land, especially as every migratory bird that flies over stops there as part of its migration pattern. 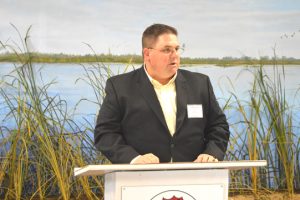 Chad Anderson, Site Director for Port Neches Operations, spoke about the tertiary treatment that Huntsman engages in to treat its wastewater at its facility. According to him, as part of its “polishing area for the environment,” the water is treated and purified to such a degree that it comes out cleaner than it was when it first became wastewater.

“We’re committed to improving the environment,” Anderson said, before listing the various kinds of wildlife that Huntsman’s wetlands play host to.

“We have an industrial philosophy that’s almost in harmony with the environment,” he said. “We are firm believers in being a good corporation and good steward and in giving back to the community.”

Anderson said the company takes what it learns from its environmental studies and shows students in various Earth classes like habitat study and environmental science.

Furthermore, Anderson said Huntsman was changing the image of a chemical company to include that of a good steward of the environment.

“We’re deeming wetland resources as valuable resources. We are ensuring we protect that habitat.” 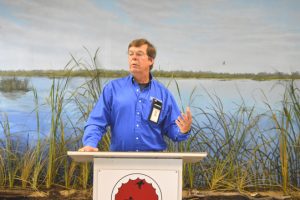 Brenda Duhon, assistant superintendent for Curriculum and Instruction/Technology for PN-G, said one of their teachers and 15 students gathered to design the backdrop that was used at Huntsman’s Earth Day event.

“We’ve also hosted contests to design the logos for the signs,” she said, pointing out some of the colorful designs on display at the event. “A lot of classes can compete.”

In addition, Duhon said their upcoming environmental science class at the high school is possible because of their partnership with Huntsman. The class is scheduled to start next year.

No disruptions at PN-G on Columbine anniversary

PORT NECHES — It was business as usual one day after a Port Neches-Groves High School student was arrested for a... read more