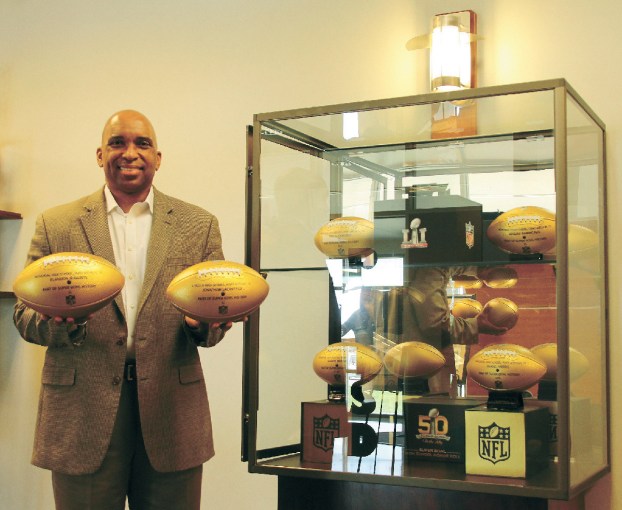 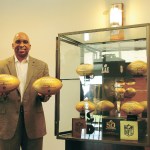 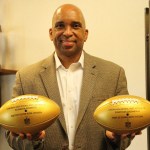 (Participants listed in alphabetical order, with alma mater, team played or coached for in Super Bowl and position, game result and year game was played)

“We were really looking forward to the two additional footballs from the eight,” Porterie said. “So, now there are 10. The Port Arthur community is really proud of all 10 of our community men who have played in the Super Bowl.”

One of them actually coached the Dallas Cowboys to two straight championships.

PAISD on Thursday received its ninth and 10th gold footballs through the NFL’s Super Bowl High School Honor Roll initiative, which presents a gold ball to each school for every player or head coach which has participated in the Super Bowl since the game’s founding in the 1966 season. The High School Honor Roll honored Memorial High with the balls since its predecessors — Thomas Jefferson, Lincoln and Stephen F. Austin — merged in 2002.

The history of PAISD’s success with football and athletics as a whole on the professional level doesn’t surprise district media specialist and alumna Kristyn Hunt Cathey as much as it did the district’s track record in the NFL’s centerpiece event.

“Of course, we have [former Lincoln championship coach] James Gamble with basketball, and we had a really good football team, so I’m not amazed at all, but I was amazed to know we had this many people participate in the Super Bowl,” said Cathey, a Lincoln graduate.

The two newest balls honored 2012 Memorial graduate Elandon Roberts, who is a linebacker on the world champion New England Patriots, and 2000 Lincoln grad Jonathan Babineaux, who was recently a defensive tackle for the Atlanta Falcons. Babineaux is a free agent.

New England came from 28-3 down to win the first overtime Super Bowl 34-28 in February. The Patriots visited the White House earlier this week in honor of their fifth world championship.

Roberts is the first Memorial alumnus to play in the Big Game. Babineaux’s brother Jordan, who also graduated from Lincoln in 2000, was the most recent Super Bowl player with the Seattle Seahawks in the 2005 season until this year.

Memorial has more golden footballs than any other high school honored through the initiative. But what really excites Porterie is that many of the gold ball honorees either give back to the community or are working here.

One of PAISD’s employees, former 49ers linebacker Bobby Leopold, is an economics teacher at Memorial. Leopold won a Super Bowl in the 1981 season.

“Elandon was here talking to our Memorial High School students not long ago, last week,” Porterie said. “Jonathan Babineaux and his brother Jordan are always here. Bobby Leopold works for the district. They’re here with us, and they didn’t forget about their community. I’m pretty sure the community was proud of them when they played in the Super Bowl. We’re proud of them when they become older and do special things for us.”

BEAUMONT — In a career that produced victories in the Indianapolis and Daytona 500s as well as championships in the... read more