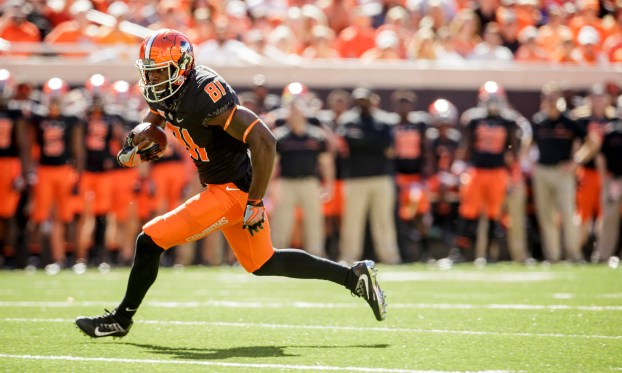 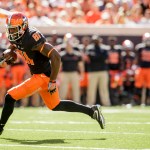 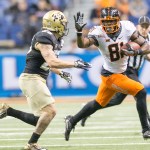 Jhajuan Seales of Oklahoma State capped his collegiate career with three receptions for 43 yards and a touchdown in the Dec. 29 Alamo Bowl victory over Colorado. (Bruce Waterfield/Oklahoma State University Athletics) 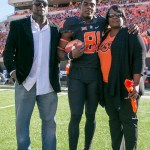 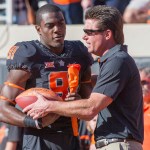 A year ago, Jhajuan Seales’ high school teammate was at home in Port Arthur waiting for his name to be called in the NFL Draft.

Almost 10 months after that special moment, Elandon Roberts was in Houston celebrating with the New England Patriots after the greatest comeback in Super Bowl history.

“Elandon is one of my best friends,” Seales said. “We talk to each other all the time. He keeps me grounded and keeps me motivated. He talks to me about what he needs to do to keep grinding and being the best that he can be.”

When Seales and Roberts were seniors at Memorial, they led the Titans to their deepest playoff run in school history, reaching the state semifinals in 6A Division II.

Asked about the biggest lesson he learned at Memorial, Seales said: “Just overcoming adversity, learning the game. Knowing if you really want it, you have to outwork the player in front of you.”

Seales’ selection in this year’s NFL Draft is more of a matter of when rather than if. He’s expected to become the third Memorial graduate in the school’s 15-year history to be drafted in the NFL.

“He had all the ability in high school to be a legitimate football player,” Memorial coach Kenny Harrison said. “All he needed was an opportunity, and obviously Oklahoma State gave him a chance and he made the most of it. As far as what he improved on, I couldn’t say because he already had all the ability. He had the size and speed and the work ethic.”

Another classmate of Seales, recent Prairie View A&M cornerback Terrence Singleton, has a chance to be drafted as well, Harrison said, after having a successful pro day. Singleton, who had three interceptions and 70 tackles, graduated from Baylor in four years and earned a transfer season with the Panthers.

If Singleton and Seales make NFL regular-season rosters, they’ll become the fifth and sixth Memorial alumni to do so, following Jamaal Charles, James Johnson, Danny Gorrer and Roberts. Charles and Roberts were drafted.

Ranked 101st of 440 wide receivers according to the website NFL Draft Scout, Seales, the former Oklahoma State wide receiver, believes he’ll be drafted anywhere in the fourth through seventh rounds.

But where he lands or who picks him up doesn’t worry him or his — and Roberts’ — agent, Deryk Gilmore of Atlanta. Gilmore said one of Seales’ former coaches, Shawn Narcisse, introduced him to Seales.

“I think [Seales] has an NFL skill set,” Gilmore said. “They want people who can move in space, and that’s what Jhajuan does. He can be a wide receiver, running back or special teams player. You look at his measurables, and he ranked up there among the top in the [NFL] Combine in three different categories.”

Seales did not attend the NFL Combine, but his fastest 40-yard time is 4.42 seconds, he did 22 repetitions on the 225-pound bench — two fewer than Combine leader and former Lamar cornerback Brendan Langley — at Oklahoma State’s pro day, his 41.5-inch vertical leap would have been third-best, his 4.36-second 20-yard shuttle would have tied for third, and his 7.27-second three-cone drill would have been third as well.

Seales redshirted his first year in Stillwater and came onto the scene in 2013 with 571 yards and three touchdowns on 39 receptions. But he did not do as well his next two years, making 18 catches each year as he was dealing with off-field issues.

He was arrested on complaints of public intoxication on Oct. 22, 2014 and charged with driving under the influence of alcohol and with an open container on Oct. 31, 2015, and Oklahoma State coach Mike Gundy suspended him for one game each time.

The receiver said he relied on his faith in the Lord during his personal trials.

“Knowing that the game I love to play can be taken from me,” Seales said, was enough to set him straight. “I started working hard on the football season and getting better.”

His senior season at Oklahoma State was his best. He racked up 615 yards and four scores on 37 carries, with a career long of 86 yards against Pittsburgh in a Sept. 17 game that set up Rennie Childs’ winning 1-yard carry with 1:28 to go.

ESPN broadcast the intersectional contest with Seales catching seven passes for a career-high 129 yards, his quarterback Mason Rudolph throwing for a school-record 540 yards and inspirational Pittsburgh running back James Conner going for 111 yards that day.

Seales remembers the hype going into that game, the Cowboys’ first since a controversial defeat to Central Michigan. The game was actually suspended due to lightning early in the fourth quarter for almost 2 hours, according to ESPN.

“We knew we were going to face a great DB [defensive back] in man-to-man,” said Seales, referring to senior Avonte Maddox, who led the Panthers with three interceptions that year. “We worked on it all weekend.”

While that seemingly was Seales’ game of his life, his all-time favorite as a Cowboy was his last in the orange and black. He scored a touchdown in a 38-8 rout of 10th-ranked Colorado in the Alamo Bowl in San Antonio. Oklahoma State finished the season 10-3 and ranked No. 11.

“It was a very special moment when I scored my first and my last touchdowns [as a Cowboy],” said Seales, who earned a spot in the NFLPA Collegiate Bowl in Carson, Calif.

Seales will earn his degree this May in sports management — more than likely with an NFL career ahead of him.

“This is a deep draft with receivers with skill sets,” Gilmore said. “We’re not worried about one day in the NFL. We’re worried about setting up a long career.”