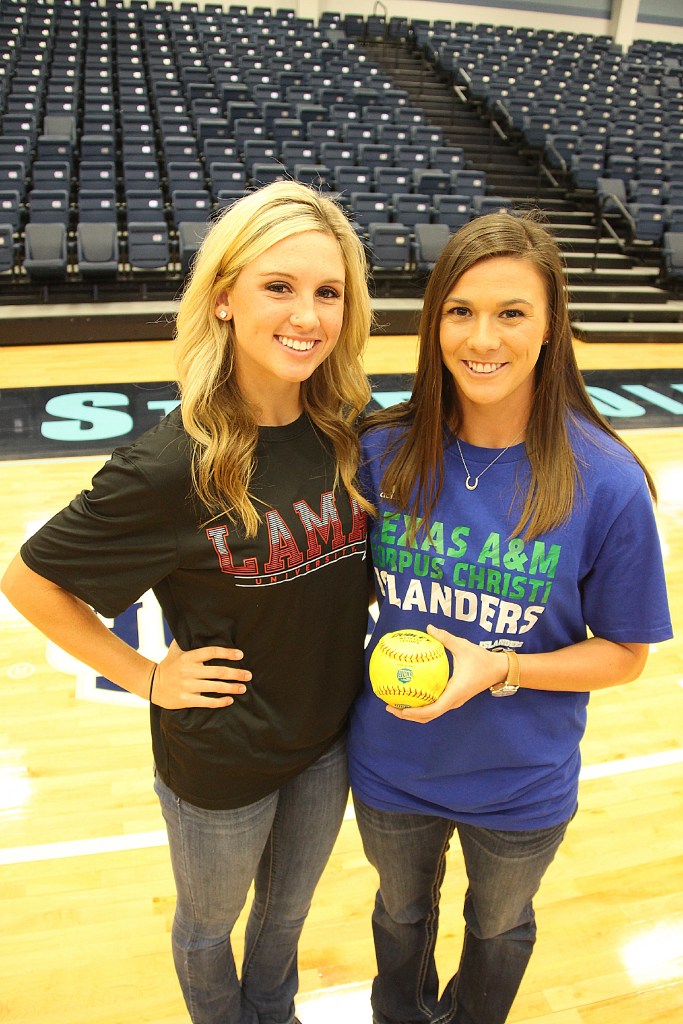 Welcome back to the Southland Conference, Savana Guidry.

The recent NJCAA Player of the Week for Lamar State College Port Arthur made it official Wednesday and signed a letter of intent with Lamar University during a ceremony that also saw teammate Kayla Sheridan commit to Texas A&M-Corpus Christi.

Guidry, who graduated from Nederland two years ago, gets to stay home after starting her college career at Houston Baptist.

“I’m very excited to be in the Southland Conference,” the Seahawks shortstop said. “It’s a very competitive conference. When I started out, HBU wasn’t the best fit for me, so I decided to come back home, come to Lamar State, become a better person and get my GPA up and work hard. It’s always been my goal to go to Lamar because they’re very competitive and they’re always one of the top seeds in the conference.”

Lamar finished as Southland Conference runner-up last season and is in fourth place this year at 10-5, four games behind defending champion McNeese State. The Cardinals are 20-20 overall.

The story behind Guidry’s play this season has been her offense. She is hitting .500 this season with 32 RBI, 38 stolen bases and 51 runs in 50 games. She had hit safely in each of her last 20 games until last Saturday’s second game at San Jacinto College-South.

“She’s doing really well,” Lamar State coach Vance Edwards said. “We’re excited she’s getting an opportunity to go to Lamar so her family can see her play and we can see her play some more.”

The pitching, of course, is different between the NJCAA and NCAA levels, Guidry pointed out, adding playing in junior college gave her a better feel for the type of hitter she is. When Fastpitch News named her NJCAA Player of the Week on March 21, she came off hitting .708 through six Region XIV games, including three triples, eight doubles and seven stolen bases.

Her potential All-America season has now led her back to the Southland, where Sheridan, a utility player from Sulphur, La., will don the blue and green for Corpus Christi. It’s a change of heart from considering not playing after this season.

“I just wanted to keep playing. I don’t want to stop until I have to. I just want to finish these two years out while I can,” Sheridan said.

“It’s really exciting to sign with Kayla,” Guidry said. “We’re the No. 1 and 2 batters, and we feed off each other very well. I’m really proud of her.

“She should play at that level, and I can’t wait to be playing against her in the conference.”

NOT THE ONLY NATIONAL PLAYER OF THE WEEK

Lamar State freshman Ashley May might be known for her pitching prowess, but she’s also a mean batter as well.

May, of Cleveland, has driven in 44 runs and homered seven times this season, but it’s her pitching ability that earned her NJCAA Pitcher of the Week accolades on April 4. That gave Lamar State two nationally recognized players of the week in the same season for the first time in program history.

“Just working hard and believing in my team and allowing them to do what they do behind me to help me do the best I could,” May said.

“She’s a worker,” Edwards said. “She likes to go out there and pitch. She does her best every time. We’re very proud of her also, and she had a very good week.

Our conference is one of the toughest conferences in the nation. If you do well in our conference, you’re doing well overall.”

The Seahawks (27-27, 13-7 Region XIV South Zone) have qualified for the upcoming region playoffs but have six games remaining, including two Thursday at home against Baton Rouge Community College and two next Wednesday at home against Galveston College. They’ll close the regular season April 22 with a doubleheader at Blinn College.