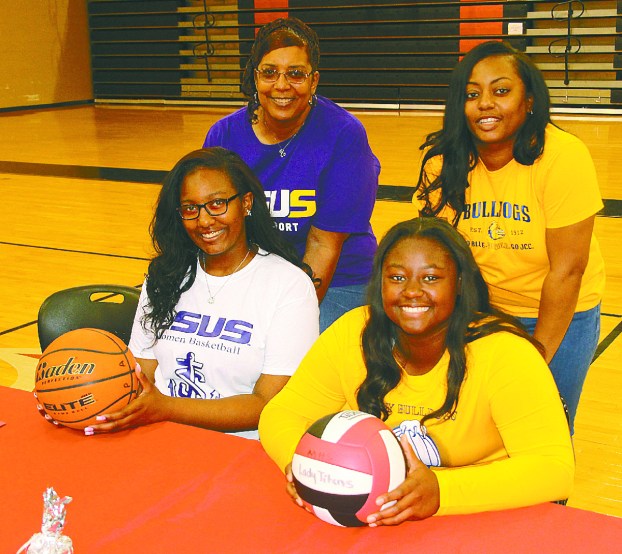 Averaging a double-double per game, Port Arthur Memorial center Kennedi Lofton drew looks from NCAA Division I coaches and was even nominated for the McDonald’s All-American Game, the highest all-star honor for a basketball player.

And LSU Shreveport just landed her.

Lofton signed with the NAIA Pilots on Wednesday during a ceremony, as Memorial volleyball player Riyah Collins committed to Jarvis Christian College, located just west of Longview in Hawkins.

The 6-foot-1 Lofton said it was good thing earning a scholarship, considering she missed about 14 games this past season with an ankle injury.

A Memorial graduate who just finished her final season at LSUS, guard Chaterra Cage, influenced Lofton to go to the university.

Lofton was a standout for the Titans averaging 10 points, two blocks and 12 to 13 rebounds per game. However, Division I teams were hesitant to offer Lofton due to the injury and wanted to see her play more, Memorial coach Kevin Henry said.

“I think it’s a good decision,” Henry said of Lofton’s college choice. “Her and her family did their homework, and she wants to go into nursing. They’ve got a good nursing program over there. She’s following the footsteps of one of our other Lady Titans.”

Collins was named District 22-5A’s setter of the year after finishing her senior season with 22 aces.

“I improved on my attitude and my setting,” Collins said. “I just started using my head more and got into the game more.”

Memorial volleyball coach Bianca Dixon said she’ll miss “the most beautiful hands” she’s seen from a setter like Collins “in a long time,” but she’s appreciative of the fact that Collins is working with the returning Titans in preparation for next season.

“The touch is soft,” Dixon said, of Collins’ setting. “Anything you put in the hands is going to go to the right position. That’s beautiful hands, and not everybody has that. You can train a setter but she’s like a born setter.”