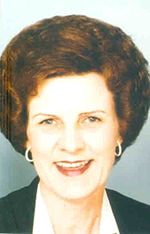 Inez Dore’ Arpin, 85 of Groves, passed away on Sunday, April 9, 2017 at the Medical Center of Southeast Texas after a short illness.

Inez was born in Youngsville, Louisiana and has lived the past 64 years in Groves.

She was a wonderful wife, mother and grandmother. She was happiest when she was cooking for family and friends. Everyone that entered her home was truly welcomed. All thought her cajun dishes were delicious. She was a member of the Altar Society at Immaculate Conception Church and St. Peter’s Church. Inez loved an occasional trip to the casino.

She is survived by her two daughters, Lana Parker and husband, Ruelle Parker and Kathaleen Arpin and Joe Higgins. Her pride and joy, three granddaughters, Charisse and husband, Richard Short, Tamara and husband, Blake Segura and Alaina and husband, Jason McGraw; she also had 3 great grandchildren that were the apple of her eye, Phoebe Short, Gage McGraw and Knox McGraw. Inez had a sister-in-law, Diana Dore’ that was more like a sister.

The family would like to give a special thanks to Theresa and Allen Suire, her neighbors that were just like family; and Barbara Melancon for all the times you took care of her.

Visitation for family and friends will be on Wednesday, April 12, 2017 from 5:00 PM till 8:00 PM with rosary to be prayed at 6:00 PM at Clayton Thompson Funeral Home in Groves. A Mass of Christian Burial will be celebrated at 10:00 AM Thursday, April 13, 2017 at St. Peter the Apostle Catholic Church in Groves with Rev. J. C. Coon, serving as celebrant. Burial will follow in Greenlawn Memorial Park.