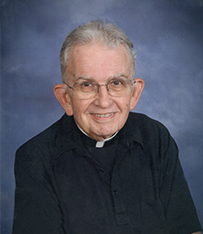 Rev. Msgr. Bennie Patillo, Pastor Emeritus of St. Elizabeth Parish in Port Neches and former Vicar General/Chancellor, a native of Port Arthur, 80, passed away on Wednesday, April 5, 2017 at his residence in Port Neches. He was born August 15, 1937 to the late Joe Patillo and Edna Lee Taliaferro Patillo in Port Arthur.

Msgr. Bennie received a Bachelor of Science in Biology from Lamar State College of Technology in Beaumont in 1958 and a Master of Education from Loyola University in Chicago in 1971. Msgr. Bennie was employed at St. Mary Hospital in Port Arthur, while a pre-med student. He developed a close friendship with the Sisters of Charity of the Incarnate Word. This friendship led Msgr. Bennie, at age 19 and his mother, Edna, to take instructions to become Catholics. After completing his studies at Lamar College, he went on to teach at Thomas Edison Junior High School in Port Arthur, before entering the seminary in 1959. He attended St. Mary Seminary in Houston and was ordained a priest on May 25, 1967. Msgr. Bennie’s first assignment was as an associate pastor at St. Pius X Parish in Beaumont. He later served as an associate at St. Mary in Orange, where he also taught high school religion for two years. He became a full-time counselor at Monsignor Kelly High School in Beaumont in 1969 and held the same position at Bishop Byrne High School in Port Arthur. In the years that followed, he served in many parishes including St. James and St. Joseph in Port Arthur, also Immaculate Conception in Groves. Msgr. Bennie was named pastor of Our Lady of the Pines Parish in Woodville on June 15, 1973. He was named Assistant Superintendent of schools for the Diocese of Beaumont in 1977 and served as Superintendent for five years after being appointed to that position in 1978. In 1985, Msgr. Bennie was appointed Chancellor of the Diocese of Beaumont and Rector of St. Anthony Cathedral. He served in these ministries for 12 years. He was then appointed Pastor of St. Elizabeth Catholic Church in Port Neches in 1995 and Pro Vicar General of the Diocese. In 2009, Msgr. Bennie was appointed a Prelate of Honor by Pope Benedict XVI, with the title of Monsignor. Msgr. Bennie retired as pastor, on October 31, 2014 and was given the honorary title of Pastor Emeritus by Bishop Curtis J. Guillory.

A visitation will be held Sunday, April 9, 2017 at St. Anthony Cathedral Basilica in Beaumont from 4:00 p.m. to 9:00 p.m. The reception of the body will be at 4:00 p.m. by Bishop Curtis J. Guillory. A vigil service will be celebrated at 6:00 p.m. by Msgr. Kenneth Greig, Pastor Emeritus from St. Peter the Apostle Church and Immaculate Conception Church in Groves.

A visitation will be held Monday, April 10, 2017 at St. Elizabeth Catholic Church in Port Neches from 8:00 a.m. to 9:30 a.m. A reception of the body will be at 8:00 a.m. by Father Shane Baxter, Pastor, Vicar General. A Mass of Christian Burial will be at 10:00 a.m., celebrated by Bishop Curtis J. Guillory with concelebrating priest. The interment will follow at Greenlawn Memorial Park in Groves, under the direction of Melancon’s Funeral Home in Nederland.

In lieu of flowers, memorial contributions can be made to St. Elizabeth Catholic Church located at 2006 Nall Street in Port Neches, TX 77651.